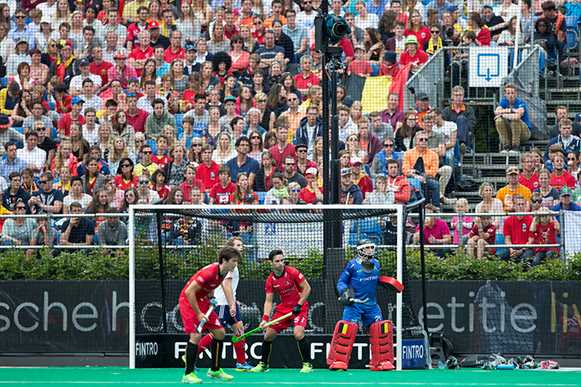 Following an opening weekend packed with excitement, drama, surprises and sublime performances, we look ahead to Tuesday’s competition Day 3 of the FINTRO Hockey World League Semi-Finals as the HWL Finals and Rio 2016 Olympic Games qualification race hots up.

Men’s Pool B: Great Britain v Ireland - 1200 (CEST)
Great Britain claimed a creditable 2-2 draw against host nation Belgium on Sunday and will be looking to build on that excellent start by claiming victory over Ireland, who will be playing their first match of the competition. However the Green Machine - winners of the Hockey World League Round 2 event in San Diego - are more than capable of causing a shock result in this fixture.

Women’s Pool B: New Zealand v India - 1400 (CEST)
The Black Sticks were in sparkling form in their 12-0 win over Poland on Saturday, and will fancy their chances against an India team that fell to a 1-0 loss against Belgium’s Red Panthers. That said, India's Eves are blessed with immense talent as well as the ability to surprise, so it might not be as easy to predict as some might think.

Men’s Pool A: India v Poland - 1600 (CEST)
Sardar Singh’s men got off to a decent start with a 3-2 victory over France on Saturday, but Poland proved in their narrow defeat at the hands of Pakistan that they are tenacious, talented and extremely well organised. Giant defender Pawel Bratkowski has already shown in this tournament that he has a ferocious penalty corner drag-flick, and a big performance from him could have a significant impact on the outcome of this match.

Men’s Pool B: Belgium v China - 1800 (CEST)
The home fans came out in their thousands to watch the Red Lions kick off their campaign with a 2-2 draw against Great Britain, and another full house is expected once again. However, China’s narrow 3-2 defeat to Malaysia provided plenty of evidence that they are competitive at this level, despite being the lowest ranked team in the competition at 31 in the world.

Women’s Pool A: Japan v Netherlands - 2000 (CEST)
Reigning World, Olympic and Hockey World League champions the Netherlands are sitting proudly at the top of Pool A following triumphs over France and Korea, although Head Coach Sjoerd Marijne was certainly not satisfied with his team’s performance levels in the slender 2-1 win against the Koreans. Japan’s Cherry Blossoms were lively in Sunday’s meeting against Les Bleues, and will be looking forward to the opportunity of having a crack at the number 1 ranked team.

Don’t forget! You can follow all of the action on the FIH website as well as across our social media channels. Live streaming is available on www.starsports.com, dependant on broadcast rights agreements.