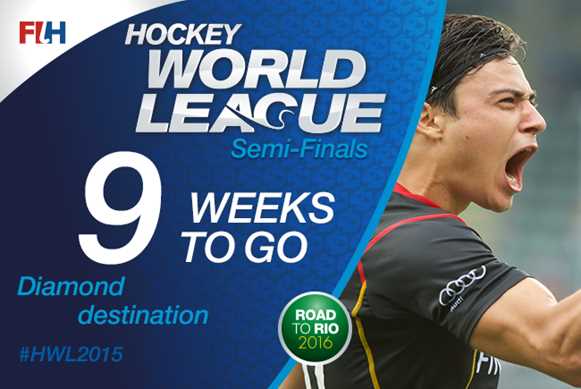 With so much riding on the results of the HWL Semi-Finals, who will claim the top prize in Antwerp?

Home to fries, chocolate and diamonds, quirky Antwerp is the only venue to host both a men’s and a women’s event in this year’s HWL Semi-Final. And so in June, 20 hockey teams will be descending on the Belgium city looking for a top three finish and a ticket to Rio 2016, as well as a place at the season’s showcase event, the HWL Finals, played in India and Argentina in December.

The Belgium city is best known as centre of the world diamond trade, but it offers much more to its visitors. It is the world’s fifth largest port, which makes it a lively, vibrant and multi-cultured place to be. And there is history wherever you look. The medieval streets, gothic buildings and renaissance monuments remind you of its rich sea-faring heritage, while the hustle and bustle of modern life is in evidence at the Grote Markt.

It also has an unfinished piece of architecture - the Cathedral of Our Lady was started in 1351, and remains uncompleted eight centuries later.

The teams who will be competing in Antwerp include both the men’s and women’s highest ranked teams. World number one side Australia men will be seeking to continue their fantastic run of results, while the Netherlands women, who are also ranked one in the world, will be hoping to thwart the ambitions of their nearest rivals, the second-ranked Hockeyroos.

Both Belgium men and women will be looking for a win on home soil, while India men, under new coach Paul van Ass, will want to maintain their recent good form, which has seen them already book their place at Rio 2016.

While many of the teams will be comfortable on the global stage, there are some relative newcomers who will need to find their feet quickly. Azerbaijan, Italy, India and Poland are all qualifiers through the women’s HWL Round 2 competition, while Malaysia, France, Poland, Ireland and China have all qualified via the men’s HWL Round 2 route.

For the fans, time away from the pitch can be filled by watching the world go by from the numerous street cafes or by exploring the architecture that liberally sprinkles the streets of Belgium’s second largest city. The Paleis op de Meir is an 18th century palatial building used by Napoleon and then the Belgian royal family, while the gracious Onze-Lieve-Vrouwekathedraal is believed to be Belgium’s finest Gothic cathedral. Another piece of architecture well worth a visit is the Museum Plantin-Moretus –once the world’s first industrial printing works, it is now a Unesco World Heritage site and museum.

And of course, when in Belgium it is fun to try its national cuisine –mussels and fries. Bar Tabac is a tiny bar that looks as if it has been plucked from a rural village, with decor that is a mixture of old metal chairs and tables and wallpaper that is a Michelin map, and has a resident DJ spinning tracks to its jam-packed clientele.