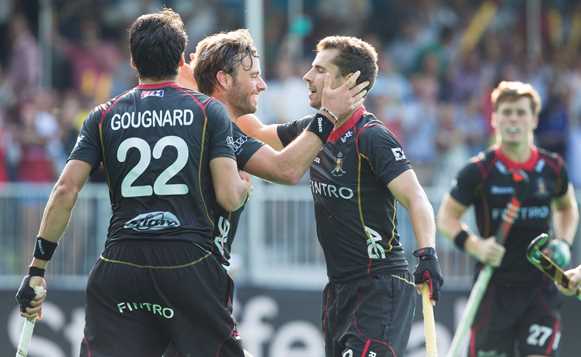 Belgium and Australia won their respective semi-finals by clear margins to secure their places in the final of the FINTRO Hockey World League Semi-Finals. The result means India and Great Britain will contest third place.

In the earlier matches, Ireland beat Pakistan to set up a fifth place battle with Malaysia, who defeated France in a feisty encounter.

This was a game that saw Australia's flair and attack stifled for much of the game by an energetic and disciplined Great Britain defence.

And it was Great Britain who nearly opened the scoring when David Condon was in a free position as the ball fell to him. However, in a game that was played at a high tempo and with flashes of brilliance from both teams, it was the deadly finishing of Australia that was the difference between the teams.

The deadlock was broken when Blake Govers (28') crunched the ball under Pinner to make it 1-0. it took Govers' personal goal tally to seven, making him the current top scorer.

Australia re-took the lead when Daniel Beale (38') found himself facing an empty goal as Pinner was drawn out of position, but that lead could have been greater had the Great Britain 'keeper not pulled off a fabulous point-blank save minutes earlier from Jamie Dwyer.

The nail was hammered into the Great Britain coffin with just nine minutes left on the clock when brilliant interchange between Dwyer and Jacob Whetton (51') saw the latter slot the ball home.

The result means that Australia will play Belgium in the final, while Great Britain face India for third place.

"Great Britain came out strong, but hard work from all the boys saw us through," said Australia's opening scorer Blake Govers.

"I think we just failed to play through the pressure," said Nick Catlin. "Australia turned the ball over too much. And we were disappointed to concede straight after scoring the equaliser."

Florent van Aubel scored a hat trick as Belgium delighted the home crowd with a 4-0 victory over India in the first semi-final match of the FINTRO Hockey World League Semi-Final.

The game was won in the opening few minutes as Belgium took an early lead through Florent van Aubel and Tanguy Cosyns.

Van Aubel went on to score his hat trick later in the game, but with Rupinder Singh lacking his usual fire power in front of goal and the India forward line coming short against strong and disciplined Red Lion's defence, the outcome was virtually assured by half-time.

The Red Lions took the lead when a reverse stick shot from Tom Boon was touched into the goal by Florent van Aubel (2'). This lead was extended when Tanguy Cosyns (8') hit a belter of a strike into the corner of Sreejesh Parattu's goal.

For the remainder of the quarter, Belgium's tactics changed and they sat back to absorb the India pressure. When the Red Lions did break down play, they were quick to counter-attack.

India created their own chances in the half, one of the best came when Gurbaj Singh's movement created space but the subsequent shot from Yuvraj Walmiki was wide.

In the second half, India came out with a renewed vigour and created more scoring opportunities. Rupindar Singh shot a penalty corner wide, and Sardar Singh was becoming increasingly dominant in midfield.

A steal by Jerome Truyens in midfield put Belgium back on the attack and the subsequent penalty corner was slotted home by Van Aubel (41'), the ball falling to him after it hit the post. Indian won a penalty corner after Arthur van Doren fouled but Rupinder Singh was unable to get his blistering shot on target.

The India drag flick specialist showed his frustration as his shot flew wide. Speaking later he said: "Today we just couldn't make the chances count. Belgium built that early lead and defended well, it was difficult to play against them."

Van Aubel's third (53') was an instinctive goal. he picked the ball up to the left of the goal and fired into a narrow gap between goalkeeper and post.

"We didn't play with our usual defensive structure against France (in the quarter-finals)," said Arthur van Doren. "We learnt from that and today our defence built the platform so that our forwards could play with their flair and skill."

Malaysia bounced back from the disappointment of their loss against India to ensure they are still in with a shot at fifth place.

But, the Speedy Tigers were put through their paces by a tenacious French team. The deadlock was broken at the start of the second quarter when the ever-industrious Hugo Genestet found Jean Laurent Kieffer (18') with a perfect defence-splitting pass. The deflection flew over 'keeper Roslan Jamaluddin's head.

The lead was short-lived as Shahrun Abdullah's (19') shot rebounded to Muhammad Shamsul, who slammed the ball home.

Malaysia took the lead in the second half when Azuan Hasan (37') dived full length onto a cross to put the Speedy Tigers ahead.

In the final quarter, some French ill-discipline took its toll on the lower-ranked side. Guillaume Deront was given a yellow card for a bad tackle and a few minutes later goalkeeper Martin Zylbermann was given his marching orders for an ill-timed tackle.

This was not before captain Razie Rahim had scored Malaysia's third – a ferocious penalty corner strike.

In a dramatic final few minutes, Zylbermann was dismissed and Rahim was able to double his personal tally from the penalty spot.

"After we lost to India in the quarter-finals, we knew we had to win this one and aim to finish fifth," said Faizal Saari. "We worked hard for each other and supported throughout. It was a tough game, but we kept encouraging each other from the start to the finish."

The result means France will face Pakistan in the 7/8th play-off and Malaysia will go onto to contest fifth spot with Ireland.

"This is a dark day for Pakistan," said Rashid Mehmood as he left the pitch following his team's 1-0 defeat at the hands of Ireland. The result means Pakistan have failed to qualify for the Olympics for the first time in their illustrious hockey history.

It was opposite emotions for Ireland's goalkeeper Davey Harte as he reflected upon a game that saw his side soak up pressure for most of the game, before a penalty corner gave them the all-important breakthrough goal.

"We knew that it would be that way. Pakistan is a seriously good team, with a higher ranking (10) to Ireland (14). We knew they would come at us, so we were prepared to defend for long periods."

The goal came in the 46th minute when Stephen Dowd won a penalty corner. Alan Sothern stepped up and his shot went like a rocket down the centre of the goal and past Pakistan 'keeper Imran Butt.

"We played well and created chances, but we just couldn't score," added Mehmood. These chances included a first quarter attempt that fell to Muhammad Dilber. The forward was unlucky not to see his brave diving deflection sneak past Harte - the tall 'keeper reacting swiftly to steer the ball past the post.

The second quarter saw Pakistan upping the pressure on their European rivals, but a tame effort from Muhammad Umar Bhutta was padded away almost disdainfully by Harte. The Green Shirts kept the ball pinging around Harte's circle but a staunch Irish defence continued to soak up the pressure.

Irish hearts were in their mouths when Pakistan called for a video referral in the last five minutes. Their penalty corner request was turned down and Ireland took the game to the other end of the pitch.

Pakistan removed their 'keeper Imran Butt in a last-rich effort to equal the match, but time was against them, as Eugene Magee kept a cool head and held possession as the clock ticked down. The final 100 seconds were played around the Irish circle but somehow, the Green Machine held the Green Shirts at bay and their Olympic dream remains alive.