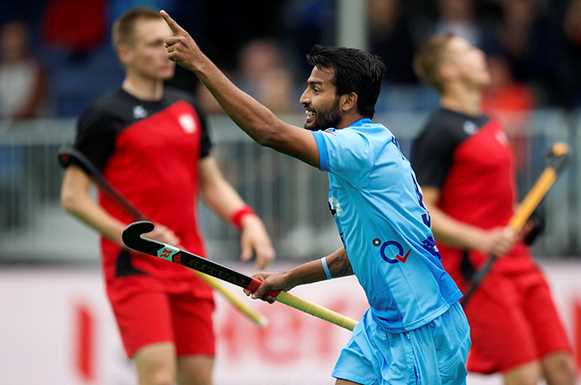 Day 3: With celebrations of Olympic Day taking place across the globe, the race to secure tickets to the Rio 2016 Games continued in the men’s competition of the FINTRO Hockey World League Semi-Finals in Antwerp. A brilliant hat-trick from Amaury Keusters helped Belgium’s Red Lions to victory against China, putting them in charge of Pool B following Great Britain’s draw with Ireland. In Pool A, brothers Yuvraj and Devinder Walmiki were both on target as India moved to the top of Pool A courtesy of a win against Poland. More information about the matches can be found below.

Pool B
Great Britain 2-2 Ireland
The first match of Day 3 saw world number 14 Ireland - winners of the Hockey World League Round 2 competition in San Diego - fight back from a two goal deficit to claim a deserved draw against higher-ranked Great Britain.

Fifth ranked GB burst out of the blocks and quickly established a 2-0 lead thanks to team captain Barry Middleton and a sensational diving deflection from Chris Griffiths before Ireland’s John Jackson rattled the frame of George Pinner’s goal with a fierce penalty corner effort. It proved to be a warning of things to come, as the Green Machine began an impressive fightback when Kyle Good and John Jackson netted goals either side of half time to restore parity.

“There is no team in this tournament that we are not coming out to try and get the full win out of, and it is a good start for us”, said Ireland’s Alan Sothern after the match. “GB are a top class side so it it great to get some points on the board ahead of back to back games against Asian opposition, which will be an entirely different challenge.”

Belgium 6-0 China
Amaury Keusters thrilled the home fans with a brilliant hat-trick as Belgium’s Red Lions claimed a big win over 31st ranked China, with Dorian Thierry, Simon Gougnard and Tom Boon also getting on the score-sheet. The result puts fourth-ranked Belgium at the top of Pool B overnight, with four points from their opening two matches. Keusters treble included a blistering backhand effort into the top left corner that must surely be considered as an early candidate for goal of the tournament.

Speaking after the match, Red Lions striker Tom Boon said: “We came good in the end and we had some good periods, but we cannot forget that we also had some bad spells too. We want to win every game so now we will look forward to our next match against Malaysia. All of the teams from Asia are getting better and we cannot underestimate any of them.”

China’s Stand-In Manager Huo Kelin said: “We are getting better every match and this team is very young, so we are looking forward to the games to come. Being here is very good, it is like a party for the hockey world and we are enjoying it very much.”

Pool A
India 3-0 Poland
A rare goal from India captain Sardar Singh helped India overcome a strong challenge from Poland, running out 3-0 winners to claim their second win in Pool A.

India’s talisman fired home a backhand rocket from the top of the circle seven minutes after half time break, adding to a delicate flicked finish from Yuvraj Walmiki in the second quarter. Devindar Walmiki - the younger brother of Yuvraj - also got his name on the score-sheet with an angled deflection eight minutes from the end of the game, putting the result beyond all doubt and moving India onto six points and leaving their European opponents still on zero.

“It has been a while since I have scored so it was a good time and it was a nice goal”, said India captain Sardar Singh after the game, who will now ensure that his troops are focussed for Thursday’s meeting against eternal rivals Pakistan.

Despite defeat, Poland were delighted to welcome Bartosz Zywiczka back into the action after suffering a head injury in his team’s match against Pakistan on Saturday.