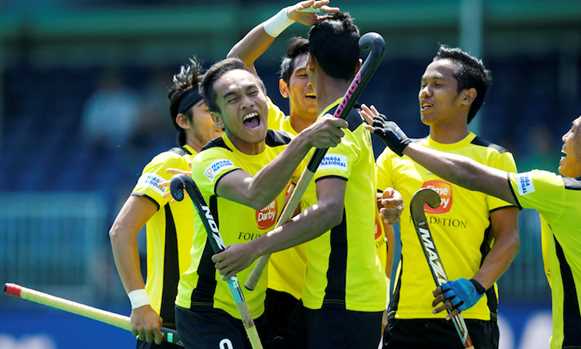 Day 5: On a day of glorious sunshine in Antwerp, Malaysia produced a magical performance to defeat Ireland’s Green Machine and move to the top of Pool B. Also in Pool B, Great Britain found top gear and motored to a big win over China to take them into second place in standings ahead of their meeting with Malaysia at the weekend.

Malaysia, Great Britain and Belgium are now certain qualifiers from Pool B for the cross-over quarter finals, although the exact finishing positions are yet to be decided. Despite losing three matches, China still have a chance to qualify but anything less than a victory in Friday’s game against Ireland would see them confirmed in the 9-10 classification game.

More details on today matches can be found below.

Pool B
Malaysia 4-2 Ireland
Two goals from Ahmad Tajuddin helped Malaysia defeat Ireland and make it two wins from two matches, moving his side to the top of Pool B.

Tajuddin scored goals in the first and fourth quarter, with a green card in the second and a yellow in the third capping an eventful day for the Malaysian number 8.

Team captain Rahim Razie and Mutalib Sukri were also on the score-sheet, with Peter Caruth and Shane O’Donoghue registering fine strikes for the Green Machine.

Although the Irish were guilty of wasting some good chances, Malaysia were worthy winners and could easily have had more were it not for the agility of goalkeeper Davey Harte, who denied Rahim Razie from the penalty spot with a brilliant reaction save.

“We fought really hard in this game because we knew what we wanted to do and we achieved it today”, said Malaysia’s Tengku Ahmad, who was clearly delighted to win in what was his 200th senior international appearance for his country. “As a team we achieved what we wanted, but personally it is a really special day to win on my 200th game.”

Ireland captain and goalkeeper Davey Harte was in a reflective mood after the match, stating: “It is bitter disappointment for us as we came into the game on the back of a pretty strong performance against Great Britain (2-2), but we gave away too many soft goals today and didn’t convert our chances, which often comes back to haunt you.”

Great Britain 8-1 China
It proved to be third game lucky for Barry Middleton’s Great Britain, who finally got their first Pool B win with a hugely convincing triumph over China.

Nick Catlin, Sam Ward and Mark Gleghorne both scored doubles in the rout to help GB move into second place in the pool, ahead of hosts Belgium but behind Malaysia.

Catlin was the first GB player to make their mark on the score-board, slapping a high ball into an open net to finish off a decisive attack, with Ward and Gleghorne netted second quarter goals before China’s Li Zecheng made the score 3-1 at half time. Four Great Britain goals arrived in the third quarter, the pick of which came from a brilliant back-hand effort from Ashley Jackson either side of fine finishes from Gleghorne and Ward before Alastair Brogdon and Catlin completed the scoring.

When asked to sum up his feelings about the game, GB’s Nick Catlin said: “We were much improved today, as we were looking to bounce back from our disappointing performance against Ireland (2-2), so I’m really pleased with what we did out there. When you play well, the scoreline kind of takes care of itself. We want to finish as high in the pool as we can, and we know that if we win the next game we will be in a really strong position.”

Great Britain’s final Pool B match will be against current table-toppers Malaysia on Sunday (28 June), while China will be back in action on Friday (26 June) when they face Ireland.