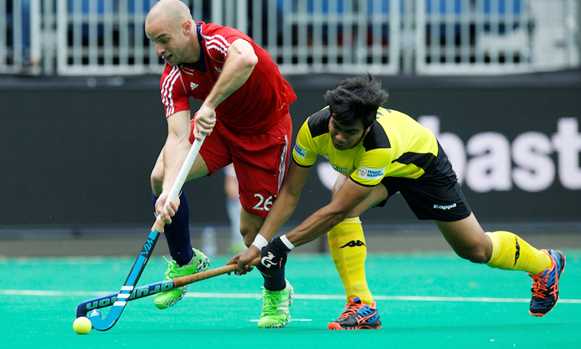 With the men’s quarter-finals of the FINTRO Hockey World League Semi-Finals taking place on Wednesday (1st July), we take a quick look back at what has happened so far at a colourful and action-packed event in Antwerp was well as looking ahead to the business end of the competition.

Men: Kookaburras cruise, Red Lions roar
Looking back: Australia’s Kookaburras were in scintillating form to top Pool A, claiming four wins from four matches and looking every bit like the number 1 ranked side in world hockey. It has also been a story about a master and an apprentice, with 36-year-old Jamie Dwyer showing absolutely no signs of decline while sensational teenage striker Blake Govers has made a staggering impact in his first major international competition to net five goals in four matches. Although Australia were the runaway winners, India and Pakistan only suffered one defeat in the pool phase while France showed great promise and may have felt that a fourth place finish didn’t do justice to the quality of their performances. Pool B was a far tighter affair, with the final positions not being settled until 25 seconds before the end of the final pool match between Belgium’s Red Lions and Ireland’s Green Machine, with Belgian captain John-John Dohmen getting a last gasp winner to seal a first place finish. Both Belgium and second placed Great Britain finished the pool phase unbeaten, with Malaysia and Ireland suffering two defeats despite excellent displays here in Antwerp.

… and ahead: Wednesday’s quarter-final matches get started at 13:00 (CEST) with Australia (1st Pool A) going head-to-head with Ireland (4th Pool B). The Kookaburras will be strong favourites, but Ireland have produced some excellent hockey here in Antwerp and will be determined to upset the form book as their quest for a ticket to the HWL Final and Rio 2016 Olympics continues. At 15:30, Great Britain (2nd Pool B) face a tough encounter against the hugely gifted and unpredictable Pakistan (3rd Pool A), with India (2nd Pool A) going head-to-head with Malaysia (3rd Pool B) in what has the potential to be the match of the day at 1800. At 20:30, Belgium’s Red Lions (1st Pool B) take on France (4th Pool A), with another huge crowd expected to flock to KHC Dragons to watch the home favourites in action. France have proven themselves to be blessed with tremendous ability and will be relishing the challenge of taking on the host nation in front of a big audience. It promises to be another fascinating day of world class action from the Hockey World League.

More details about the men’s and women’s FINTRO Hockey World League Semi-Finals including match highlights, imagery, scheduling, reports as well as all tournament information can be found right here on www.fih.ch.

To see an infographic explaining the qualification process for the men's HWL Finals, click here.

To see an infographic explaining the qualification process for the men's competition at the Rio 2016 Olympic Games, click here.