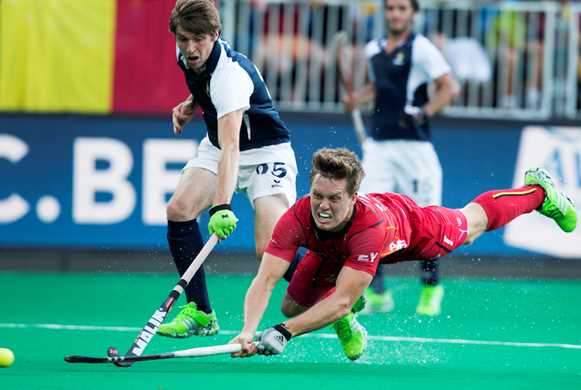 Men’s quarter-finals day at the FINTRO Hockey World League Semi-Finals was a thriller in scorching temperatures, with Australia, Great Britain, India and Belgium all seal their places in the semi-finals in Antwerp.

They overcame the respective challenges of Ireland, Pakistan, Malaysia and France to reach the final four and book their tickets to the prestigious Hockey World League Finals, that will be played in India at the end of the year. The top three finishers at the event will also be guaranteed tickets to the Rio 2016 Olympic Games.

India’s achievement of reaching the competition semi-finals has determined the complete eight-team line-up for the end of year showpiece Hockey World League Final. India are hosting that event and will be joined by Australia, Great Britain and Belgium from the HWL Semi-Final in Antwerp was well as Germany, Argentina, Netherlands and Canada, who took the top four places at the recent Argentina HWL Semi-Final in Buenos Aires.

As they have already qualified for the Rio 2016 Olympic Games by virtue of winning the 2014 Asian Games, a top three finish for India in Antwerp will create an Olympic opening for the highest ranked of the fourth place finishers from two HWL Semi-Final events held in Argentina and Belgium. If India finish fourth, then only the top three from each competition will be confirmed for the Olympic Games at this stage.

Men's semi-final day will take place on Friday 3rd July. The match scheduling and times will be confirmed at 1100 (CEST) on Thursday 2nd July.

More information on the day’s matches can be found below.

Australia 4-1 Ireland
Reigning world champions Australia were given a real test by Ireland’s Green Machine before eventually running out winners in the quarter-final phase in Antwerp.

Goals from Matt Gohdes, Jamie Dwyer, Simon Orchard and a sixth of the tournament for 18-year-old Blake Govers moved the Kookaburras to within one victory of guaranteeing a place in both the end-of-year showpiece Hockey World League Final and the Rio 2016 Olympic Games.

“We are very happy to beat Ireland as we knew they wouldn’t be easy, they drew against GB only lost in the last seconds to Belgium” said Kookaburras’ talisman Jamie Dwyer after the game. “They are a tough team, mentally and physically. Even though it was 35 or 36 degrees out there in the middle of the pitch, which was probably an advantage for us, we knew that they were going to give it a go and not die wondering, typical of the Irish spirit.”

Regarding the possibly competing in his fourth Olympic Games, Dwyer said: “It would be pretty awesome thats for sure, but there’s a long way to go. At 36 years of age, it’s not getting any easier but I’m feeling pretty good, running around okay and injury free at the moment as well as scoring a few goals, which is always nice.”

Great Britain 2-1 Pakistan
Great Britain battled to a 2-1 quarter-final win over Pakistan’s Greenshirts to book their place in the final four in Antwerp.

A stunning backhand strike from Chris Griffiths coupled with Alastair Brogdon’s poachers’ effort proved to be enough for victory despite a late reply from Umar Bhutta, edging Great Britain one step closer to achieving qualification for the Hockey World League Final and the Rio 2016 Olympic Games.

“We made it tough in the end, i think first half we were really good, felt in control and if we had got another goal ahead it would have been hopefully by a few more”, said Great Britain delighted GB captain Barry Middleton. “Obviously when you are only 2-0 up and playing a team like Pakistan, who commit players forward, they are going to make it tough but I thought we defended really well.”

Pakistan captain Muhammad Imran said: “I think we put all of our efforts into it but we were unlucky we didn’t score with our chances, but we have other games and it is important that we try to finish fifth.”

India 3-2 Malaysia
India were the winners of the third quarter-final of the day, with two ripping penalty corner efforts from Jasjit Singh Kular helping his side fight back from 2-1 down to defeat Malaysia 3-2 at the FINTRO Hockey World League Semi-Finals in Antwerp. The result puts India into the competition semi-finals, where they will face the winner of this evening’s match between Belgium and France.

India took an early lead in the contest when Satbir Singh tapped home from close range after some patient work from the ever-impressive Akashdeep Singh. However, the Malaysians hit back with two penalty corners either side of the quarter-time break, with Razie Rahim and Shahril Saabah both finding a way past Indian shot-stopper P.R. Sreejesh with excellent drag-flicks. However, a brilliant double from Jasjit Singh Kular swung the match back in India’s favour to seal a place in the competition final four.

Speaking after the game, double goal-scorer Jasjit Singh Kular said: “It was amazing. It was my first drag-flick goal in international hockey so it was amazing. Malaysia played really well, they are a really fit side and it was a tough game. We are really pumped up for the semi-final.”

Belgium 5-4 France
A blistering tempo and athletic heroics were the signature characteristics of this quarter final encounter between two European rivals, fourth-ranked Belgium and 18th-ranked France.

Despite moments of Gallic magic, it was the experience and consistency of the Belgium team that paid out in the end, as they ran out 5-4 winners thanks to goals from Florent van Aubel, Sebastien Dockier, Emmanuel Stockbroekx, John-John Dohmen and Tom Boon all on target. The entertaining match did not reflect the 14 place difference between the teams.

Martin Genestet, who scored two goals for France, including one with help from both his brothers, said: "Today I am thinking about the disappointment of the team, not my two goals. Now I will help keep the younger players focused for our next game against Malaysia. But we must take heart, we played very well today."

Captain of Belgium and one of the goal scorers, John-John Dohmen said: "We are so excited to have won in front of our home crowd. But they (France) made it difficult for us. They came back again and again. It was tough mentally."