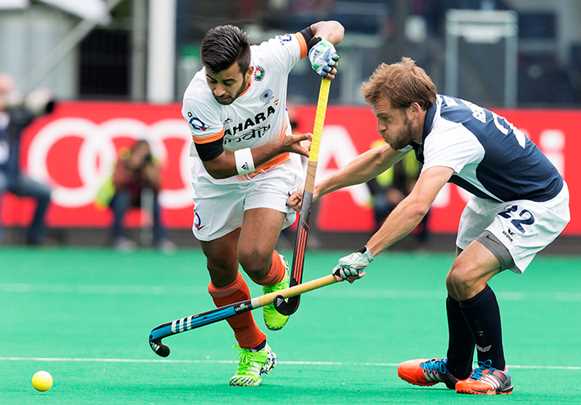 Following four exciting matches in the women’s competition, the FINTRO Hockey World League men’s competition kicked off in Antwerp on Saturday with two close matches between recognised giants and rising stars of the game. Both matches were played in Pool A, with India edging to a 3-2 win over France while Pakistan battled past Poland 2-1. More details about the day’s games can be found below.

Pool A
India 3-2 France
Ninth ranked India were pushed all the way by 18th ranked France in their opening Pool A match at the FINTRO Hockey World League Semi-Finals but eventually emerged winners thanks to a last minute strike from Ramandeep Singh.

France - winners of the HWL Round 2 event in Cape Town - stunned their illustrious opponents when they took a surprise 1-0 lead thanks to a fine strike from Olivier Sanchez. India hit back with two goals in quick succession with Manpreet Singh and Devindar Walmiki both finishing off excellent team moves to give the eight times Olympic champions a 2-1 lead at half time.

France levelled the scores in the 43rd minute when Simon Martin-Brisac crashed a powerful shot past India shot-stopper Sreejesh, giving the Europeans hope that they might claim a share of the points before a diving Ramandeep guided a loose ball into an unguarded net in the dying stages.

Speaking after the match, Martin-Brisac said: “There is no consolation in the manner of our loss because we really wanted to get something from the game. To concede so late is very disappointing, but we know we played a good game. We remain confident and will continue to work hard.”

Indian Head Coach Paul van Ass said that, due to the unpredictability of opening matches, that he certainly wasn’t expecting an easy time. “The start of a tournament is always special, there never an easy match as no-one will give an inch. The good part is that we managed to make the third goal, which was really important.”

Pakistan 2-1 Poland
2014 Champions Trophy Silver medallists Pakistan edged out brave Poland 2-1 in an absorbing contest that brought an entertaining first day of the FINTRO Hockey World League Semi-Finals in Antwerp to a close.

The Greenshirts dominated the early stages of the match and took a deserved lead when Muhammad Irfan slammed a penalty corner drag-flick into the bottom right corner after just four minutes. However, Poland’s defence tightened up and reduced their opponents to rare chances, with Shafqat Rasool going closest to adding to the Pakistan tally just before half time.

Poland goalkeeper Maciej Pacanowski produced two tremendous saves in the third quarter, showing cat-like reflexes to deny both Rasool and Muhammad Dilber to keep his team in the game going into the final quarter.

Pacanowski came up with another fine save to from a Muhammad Imran penalty corner flick before Poland’s Pawel Bratkowski slammed home ripping penalty corner of his own to tie their scores with nine minutes to play.

Pakistan were not to be denied, however, with Muhammad Waqas showing a poacher’s instinct to force the ball home from close range to give his side all three points.

“The first match is always difficult and Poland played a very physical game”, said Pakistan’s Rashid Mehmood. “We are pleased to win but we feel we should have converted so many more of our chances.”

Poland’s Bartosz Zywiczka, who suffered a head injury in the match, is reported to be doing well.