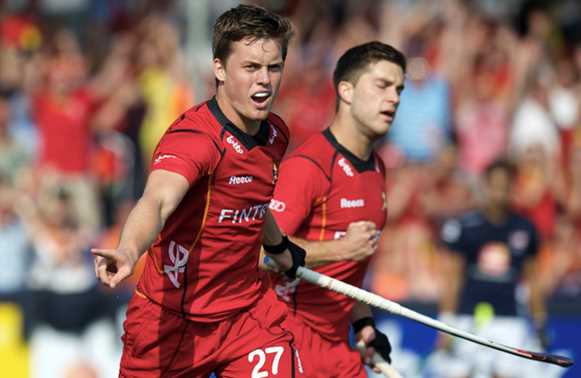 With the start of the eagerly anticipated FINTRO Hockey World League Semi-Finals in Antwerp just days away, we look at the teams that will be competing in these crucial qualification competitions for the HWL Finals and Rio 2016 Olympic Games. Today is the turn of Men’s Pool B, where host nation Belgium, Great Britain, Malaysia, Ireland and China will all be aiming to seal a place in the quarter-finals.

Belgium - current world ranking: 4
Host nation and home favourites Belgium – known as the Red Lions – have made incredible strides forward over the past few years. The team is now coached by legendary Netherlands international defender Jeroen Delmee, who replaced fellow Dutchman Marc Lammers at the helm of one of the most feared attacking sides on the planet. Belgium produced some fine performances at the Rabobank Hockey World Cup 2014 but just missed out on a place in the tournament semi-finals when they fell to a narrow defeat at the hands of England. Still, their 5th place finish at the event was their best ever at a World Cup, setting another benchmark in the development of a gifted group of players that have yet to reach their full potential. The squad named for the Hockey World League Semi-Final contains ten players have surpassed the 100 international appearances mark – John-John Dohmen (280+), Jerome Truyens (270+), Thomas Briels (220+), Felix Denayer (190+), Tom Boon (170+), Simon Gougnard (160+), Eliot van Strydonck (130+), goalkeeper Vincent Vanasch, Florent van Aubel (both 110+) and Loick Luypaert (100+). It will be something of a homecoming for four members of the Red Lions squad, with Arthur van Doren, Emmanuel Stockbroekx, Florent van Aubel and Felix Denayer being current players of the host club KHC Dragons.

Great Britain - current world ranking: 5
Following their 4th place finish at the London 2012 Olympics, Great Britain come into this tournament knowing that any hopes of landing a medal at the Rio 2016 Games could be extinguished if they do not perform to their capabilities in Antwerp. However, the squad selected by Head Coach Bobby Crutchley is more than capable of claiming a top three finish and sealing their ticket to Brazil. The GB side contains 14 athletes who competed for England at the Hero Hockey Champions Trophy in December 2014, with four changes to the group who finished seventh in the competition in Bhubaneswar, India. The most experienced player in the group is talismanic attacker and team captain Barry Middleton, who is rapidly approaching 350 combined international appearances for England and GB. Brilliant midfielder and penalty corner expert Ashley Jackson is also included, as are charismatic goalkeeper George Pinner and skillful duo Adam Dixon and Nick Catlin. The players to come into the squad are former Ireland international David Ames, who recently made his debut against Argentina after serving the qualifying period to become eligible for Great Britain, Harry Martin, who missed the Champions Trophy through injury as well as goalkeeper James Bailey. The players to miss out who travelled to the Champions Trophy are Ollie Willars, Paddy Smith, Tim Whiteman and Tom Carson.

Malaysia - current world ranking: 12
Malaysia booked their place in the Hockey World League Semi-Finals with a breathtaking display of attacking hockey at the Round 2 event in Singapore. The side cruised into the tournament semi-finals with thumping victories over Ukraine (5-1), Oman (7-0), Singapore (16-1), and Mexico (10-1) before defeating Asian rivals Japan in a tense semi-final shoot-out. Their performance in the final was staggering, sailing to an 8-0 win over Poland and in the process took Malaysia’s scoring tally to a remarkable 42 goals in just six games. Live-wire forward Faizal Saari scored 12 of those goals, and he could well be the key to Malaysian success in Antwerp. The Malaysia side selected for the Hockey World League Semi-Final is enormously experienced, containing 11 players who have made more than 100 international appearances including four who have surpassed the 200 cap barrier – Mohd Shahrun Nabil Abdullah (220+), Mohd Sukri Mutalib (210+), goalkeeper Kumar Subramiam (240+) and Azlan Misron, who is rapidly approaching 350 caps. The team coached by Tai Beng Hai finished 6th at April’s Sultan Azlan Shah Cup on home soil, a result which was certainly not ideal preparation for this event. However, the team are expected to be back to their very best in Antwerp and will be aiming to qualify for their first Summer Olympic Games since Sydney 2000, where they finished in 11th place.

Ireland - current world ranking: 14
Ireland’s ‘Green Machine’ were in blistering form at the Hockey World League Round 2 event in San Diego, storming to a comprehensive tournament victory that sealed their place in the Semi-Final phase of the HWL. The Irishmen completely justified their pre-tournament favourites tag with six wins out of six, defeating Chile (8-0), Austria (3-1), Italy (2-0), Trinidad & Tobago (12-2), Canada (2-0) before beating Austria (2-1) for a second time in the tournament final. The squad selected for the Hockey World League Semi-Final contains the majority of players who were involved in the San Diego triumph, including agile goalkeeper David Harte, experienced defender Ronan Gormley as well as lively striker Shane O’Donoghue, who was named Player of the Tournament in San Diego. Coached by former South African international Craig Fulton – who represented his country at the 1996 and 2004 Olympic Games – Ireland will feel that they have every chance of getting the required results in Antwerp. Defender Paul Gleghorne will be looking forward to his side’s pool meeting against Great Britain, where elder brother Mark Gleghorne will feature in the opposition line-up.

China - current world ranking: 31
At 31 in the FIH World Rankings, it comes as little surprise that China are massive outsiders for this event. However, those who saw them in action at the Greenfields Hockey World League Round 2 event in Cape Town will know that this team is making huge strides forward. China performed way above all expectations at that event, claiming an astonishing 2nd place finish ahead of a trio of higher-ranked nations - hosts South Africa (WR: 13), Czech Republic (WR: 20) and Egypt (WR: 21). Their stunning 2-0 victory over South Africa in the tournament semi-final is arguably the biggest shock so far in the 2014-15 Edition of the HWL, with Liu Yixian and Sun Long scoring the goals to seal a place in both the tournament final and the HWL Olympic qualifying round. The team eventually had to settle for Silver after going down to a 5-2 defeat against France, although there was a happy ending for 20-year-old Li Zecheng, who was named Young Player of the Tournament in the end of event awards.