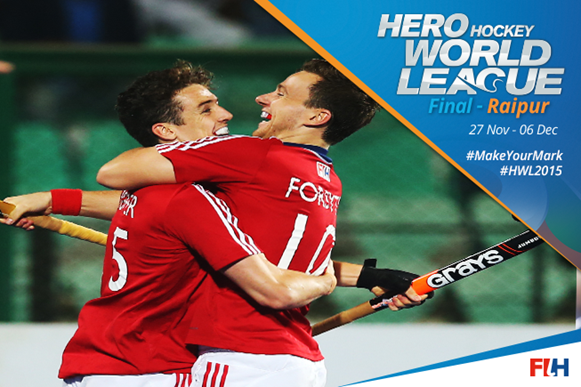 Great Britain finished top of the Pool A standings on Day 5 of the Hero Hockey World League Final 2015 courtesy of a draw with Belgium, a result which simultaneously brought the competition Pool phase to a close and confirmed the line-up for the quarter-finals in Raipur, India.

Reigning world champions Australia defeated Canada 6-0 to earn a second place finish in the Pool, ahead of Belgium’s Red Lions and the Canadian Red Caribous in third and fourth place respectively.

On Thursday 3rd December, Pool A winners Great Britain (1st Pool A) face host nation India (4th Pool B) at 18:30, while Argentina (2nd Pool B) will go head to head with Belgium (3rd Pool A) at 20:45. In the first of the Day 5 matches, Canadian goalkeeper David Carter produced a Hero Man of the Match performance but it was not enough to stop Australia from taking a 6-0 victory.

The Kookaburras were at their brilliant best in the first quarter, establishing a 4-0 lead thanks to goals from Daniel Beale, Jeremy Hayward, Dylan Wotherspoon and Matthew Dawson.

It was an electric start from the world champions, but Canada tightened up their defences and a string of excellent saves from Carter kept the Aussies at bay until the dying minutes when Kieran Govers found the target before Beale claimed his second to complete the scoring.

“I think that there was a little bit of improvement from the GB game; at the very least it was a step in the right direction”, said Australia’s Eddie Ockenden, referring to his side’s defeat against Great Britain on Sunday.

That result was not quite enough for Australia to finish top of Pool A, meaning that both the Pool standings and the quarter-final line-up would ultimately be decided by the outcome of a pulsating encounter between Great Britain and Belgium.

The Brits lead on three occasions during the match, with Phil Roper, Alastair Brogdon and Alan Forsyth goals each cancelled out by efforts from Red Lions stars Thomas Briels, Tanguy Cosyns and Tom Boon.

Belgium threw absolutely everything at their opponents in the final stages, and even replaced the goalkeeper Vincent Vanasch with an outfield player in a bid to get the goal which would have put them top of the standings. However, excellent defending ensured that GB claimed the point that they needed to win the Pool, with Australia second ahead of third ranked Belgium and fourth placed Canada.

“We know that we came to this tournament with a few players missing, but we’ve got such strength in depth that we knew we could string three good performances together, and we’ve done that tonight”, said Great Britain goalscorer Phil Roper, reflecting on a hugely successful Pool phase before turning his attention to the quarter-final showdown with the host nation. “Playing India in India is something I’ve never experienced before, and it is something to relish.”

Belgium’s Tom Boon said: “We played a good game today, and maybe we deserved a little bit better. But on the other hand it means that we will play Argentina on Thursday, instead of India in front of their home crowd, which will not be easy.”

Australia 6, Canada 0
Hero Man of the Match: David Carter (CAN)