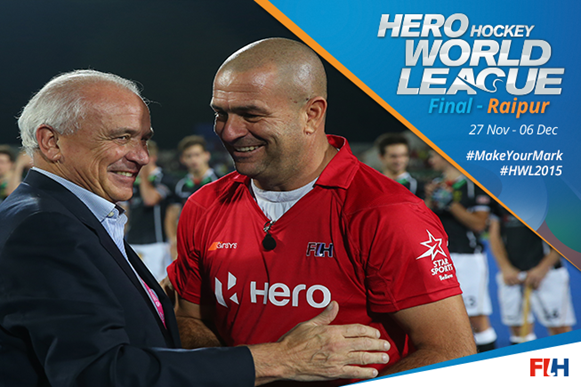 On Wednesday at the Hero Hockey World League Final 2015, Nathan Stagno (GBR) was presented with his Golden Whistle in recognition of umpiring his 100th senior international match by FIH President Leandro Negre (pictured).

Stagno, who made his international umpiring debut in 1999, took charge of the Australia versus Germany quarter-final at the event currently taking place in Raipur, India. He becomes the 36th men’s umpire to receive a Golden Whistle and the first umpire from Gibraltar to do so.

During his career, Stagno has officiated at some of the sport’s biggest competitions, including the London 2012 Olympic Games, the Rabobank Hockey World Cup 2014 in the Hague as well as two Champions Trophy events and a Commonwealth Games. As well as his 100 senior matches, Nathan has also umpired 21 junior internationals.

“For me, it is amazing”, said Stagno after his presentation. “To come from a small country like Gibraltar, where there are only around 200 people who play hockey, you can imagine how happy I feel to have been given the opportunity to umpire at this level and to get the Golden Whistle.”