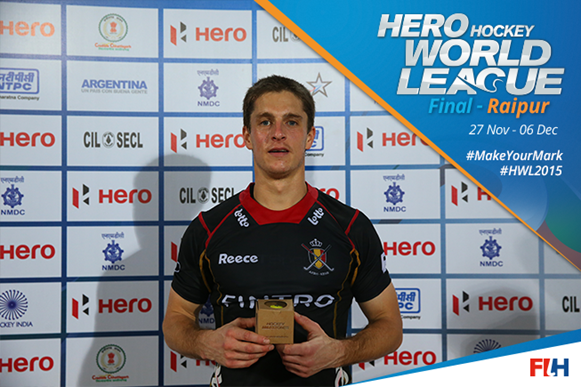 Competing in a showpiece event like the Hero Hockey World League Final 2015 is a special experience for all of the athletes here in Raipur. However, for some individuals the occasion will be something that they will remember for the rest of their lives, regardless of whether or not they go on to win the event.

During the Pool phase of the competition, numerous players reached hugely significant milestones in their playing careers, including Belgium’s Jerome Truyens (pictured). The 28-year-old marked his 300th international appearance by scoring and being named Hero Man of the Match in his team’s 7-2 Pool A defeat of Canada on Sunday.

“It is always great to have a win in such circumstances, and also to score”, said Truyens, who started his international career in 2004. “The fact that my team has won and everyone has been congratulating me has been really special. You always want to score on such occasions, so I am happy that I have done that.”

On the same day, Australia goalkeeper Andrew Charter claimed his 100th cap in his team’s 5-2 defeat at the hands of Great Britain. “100 games as a goalkeeper in such a proud team as the Kookaburras is a very special achievement for me”, said the 28-year-old World Cup winner. “It is a shame that we couldn’t get a better result, but we will aim to do that later in the tournament and hopefully we I can celebrate then!”

On Monday, Netherlands play-maker and captain Robert van der Horst played his 250th international as his side defeated Pool B rivals and host nation India. “It is a privilege for me to have been part of the team for so long, and it is an even bigger privilege to do it as the national captain”, said the 31-year-old European champion. “To play my 250th cap against India in India, it doesn’t get much better than that.”

In the same match, India defender and Asian Games Gold medalist V.R. Raghunath made his 200th appearance for his country, an achievement which clearly meant a great deal to him. “Today I was lucky enough to play my 200th game in my home country, and I am proud to wear this shirt and play in these kinds of tournaments.”

Argentina goalkeeper Juan Vivaldi marked his 200th cap with a brilliant win over Olympic champions Germany. “Today was a special day for me, and I really enjoyed the game”, said Pan American champion Vivaldi, 36. “This game was amazing for me.”