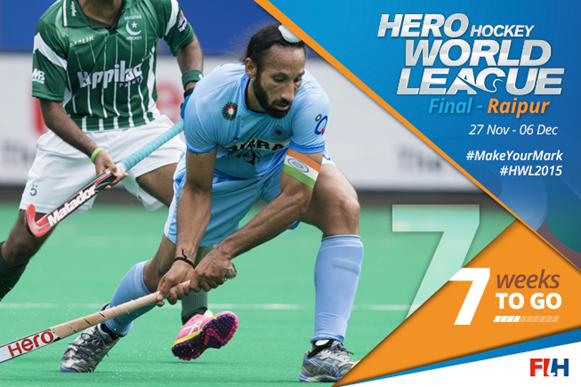 Eight time Olympic champions India (FIH World Ranking: 6) have, in recent years, been showing signs that a return to the glory days of old might be just around the corner.

That success was a sign of even greater things to come, with India storming to glory at the 2014 Asian Games and sealing their place at the Rio 2016 Olympic Games by defeating eternal rivals Pakistan in the tournament final before landing a fourth place finish at the end of year Hero Hockey Champions Trophy on home soil in Bhubaneswar.

The team have been in fine form again this year, securing a fourth place finish at the FINTRO Hockey World League Semi-Final in Antwerp, Belgium early in July.

Midfielder Sardar Singh is the captain of the India team, although he is far from being the only exceptional talent available for selection for the event in Raipur.

P.R. Sreejesh is one of the most gifted and charismatic goalkeepers around, while drag-flicking defenders V.R. Raghunath and Rupinder Pal Singh are a constant threat at penalty corners.

The forward line is also impressive, with lively attackers S.V. Sunil, Yuvraj Walmiki and Akashdeep Singh all being capable of making a big impact if selected by Dutchman Roelant Oltmans, the hugely successful coach who guided the Netherlands men to Olympic and World Cup glory in 1996 and 1998 respectively.

Key player: Sardar Singh. India’s captain is a talismanic midfielder who is rated as one of the very best players in the game. The 29-year-old has been involved with the international set-up since 2003, and in that time has grown into one  of hockey’s brightest stars. He has played in excess of 200 times for India, and looks set to feature on many more occasions in the years ahead.

Additional information: Hockey is one of the most popular sports in India both in terms of players and spectators, with the Indian national teams being passionately followed by fans that number in their millions. It is the home of the Hockey India League, the elite professional league that draws a huge global audience and attracts the finest players on the planet on an annual basis. Hockey India’s High Performance Director Roelant Oltmans was confirmed as the Head Coach in July following the departure of fellow Dutchman Paul van Ass shortly after India’s creditable fourth place finish at the FINTRO Hockey World League Semi-Final. 61-year-old Oltmans, who also guided the Netherlands women to a World Cup title in 1990, will oversee the side until the completion of the Rio 2016 Olympic Games.