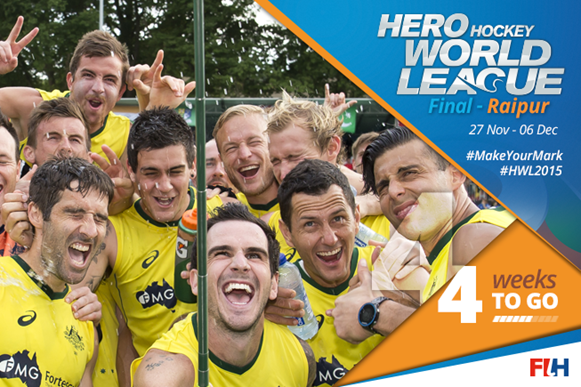 Australia (FIH World Ranking: 1) are regarded as the most consistently successful Australian sports team over the past two decades and for more than 30 years have been ranked amongst the top four nations in the world.

Their free-flowing, exciting brand of attacking hockey is a hallmark of the team and will certainly thrill the fans in Raipur. Australia have won a medal at every Olympic hockey tournament since 1992 and in total, since first competing in the Melbourne Olympic Games of 1956, have amassed nine Olympic medals.

They have won all five of the Commonwealth Games hockey tournaments played to date and in 2014 became only the third country to ever successfully defend a World Cup title when they crushed host nation the Netherlands 6-1 in the competition final in The Hague.

2015 has been another stellar year for the team coached by former Australia star Graham Reid, with his men showing outstanding form to win the FINTRO Hockey World League Semi-Final event in Antwerp and, most recently, claim their ninth Oceania Cup by defeating host nation New Zealand in Stratford.

The consistent brilliance of midfield ace Eddie Ockenden, veteran striker Jamie Dwyer and defender Mark Knowles - Dwyer’s brother-in-law and FIH Player of the Year for 2014 - played a key role in both successes, while the emergence of teenage goal-scoring sensation Blake Govers has added even more firepower to a team that is certainly not shy in front of goal.

19-year-old Blake  – younger brother of Australia stalwart Kieran Govers – finished as the top scorer in Antwerp with seven goals, earning him the Young Player of the Tournament title.

Another stand-out talent is burly defender Chris Ciriello, one of the most feared drag-flickers in the game and a man for the big occasion. In 2014, Ciriello scored hat-tricks in the World Cup and Commonwealth Games finals, and also netted the winning goal as Australia defeated Belgium to take first place at the FINTRO Hockey World League Semi-Final.

Additional information: Five times FIH Player of the Year Jamie Dwyer may be 36 years old but remains a massively influential player and will be hoping to gain selection for the event in Raipur. At the Sultan Azlan Shah Cup in Malaysia earlier this year, Dwyer became Australia’s most capped player in history, overtaking Jay Stacy’s record of 321 appearances. Dwyer has now racked up 232 goals in 345 appearances for the Kookaburras, and was on target in thfinal of the Oceania Cup 2015 as Australia defeated New Zealand to claim their ninth title. His most famous goal came in the final of the Athens 2004 Olympic Games, hitting a penalty corner winner against the Netherlands to give Australia their only Olympic title to date.