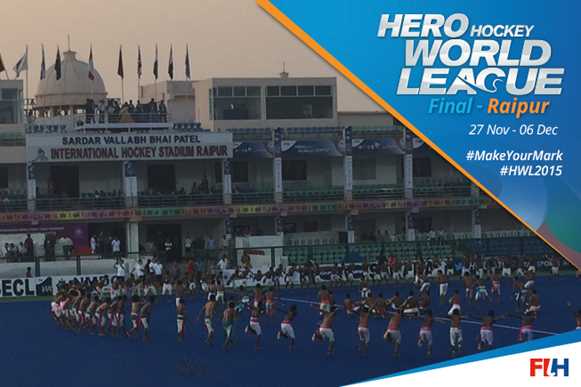 With only two days to go until the men's Hero Hockey World League Final, athletes and fans have been out and about discovering what the fascinating Indian city of Raipur has to offer.

Like so many Indian cities, this is a place of vibrancy, colour, spectacle, scents, smells and a buzz that seems to teeter on the edge of chaos, without ever tipping over.

Raipur is on the eastern side of India, situated in the middle of the agricultural plains that supply so much of the country’s rice harvest. It is a modern city – the capital of the state of Chhattisgarh – and is ranked sixth out of all the Indian cities for its governance and administration. It is also a city steeped in culture, tradition and history. Everyone coming to the event will therefore have plenty to marvel at as they explore the local area between matches.

The city came into existence in the ninth century and the old site and ruins of its early fortress can be seen in the southern end of the city. Chhattisgarh itself is awash with Buddhist monuments and palaces set among a largely forested area of waterfalls, wildlife sanctuaries and scenic landscapes. While Raipur is the industrial-focused city in the middle of the state, there are places within the city limits that will give you a taste of the region’s rich past.

You could visit the Doodhadhari Monastery, which was built in the 17th century by King Jaitsingh. The temple is dedicated to the Hindu god Lord Rama and is one of the most important religious sites in the city. It is found in the south of the city by Burha Lake and has beautiful murals and intricate carvings as well as a number of interesting burial memorials.

While visiting the monastery, you can also see the impressive 37-foot statue of Swami Vivekananda – himself a disciple of St Ramakrishna, a Hindu monk from the 19th century who taught renunciation and self-emancipation. It is the largest icon of its kind and attracts pilgrims from around the world.

The Mahant Ghasidas Museum is also worth a visit. There are five galleries to the museum, each exploring a different element of local history, culture, archaeology and natural history. It houses a fascinating collection of coins, weapons and sculptures from the 12th century Kalachuri dynasty as well as crafts, jewellery and pottery of the different indigenous tribes that have lived in Chhattisgarh over time.

While fans will have some time to explore all that Raipur and the surrounding area has to offer, the focal point will, of course, be the Sardar Vallabh Bhai Patel International Hockey Stadium at Raipur.

This stadium, with its bright blue international-standard pitch, was inaugurated just a few days ago by the chief minister of Chhattisgarh Raman Singh. The pitch has been named after Sardar Vallabh Bhai Patel, who was a main player in India’s struggle for independence in the mid-20th century. A statue of the political and social leader will stand at the entrance to the stadium.

Don't miss out on all the action from the Hero Hockey World League Final between 27 November and 6 December. Get your tickets here or watch live on TV.