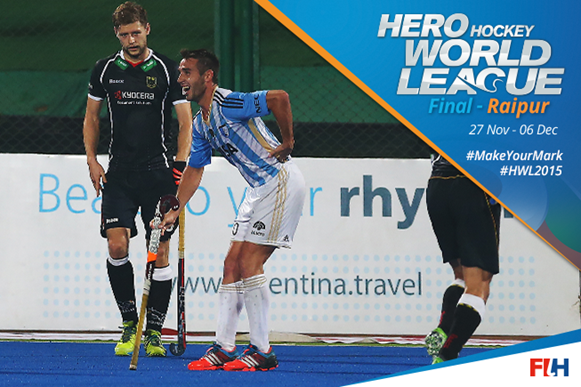 The Netherlands continued their fine form at the Hero Hockey World League Final 2015 by finishing at the top of the Pool B standings thanks to a victory over host nation India on competition Day 4 in Raipur.

The European champions sealed top spot thanks to a comfortable 3-1 win the home favourites, meaning that they will face the team that finishes fourth in Pool A, which concludes on Tuesday, in the quarter final phase. India have finished fourth in Pool B, and will now face a tough quarter-final meeting against the winner of Pool A.

India started the match brightly, but the Dutch were in control for long periods of the game before eventually taking the lead early in the third quarter thanks to a low penalty corner drag-flick from Mink van der Weerden. Mirco Pruijser added a second with a first time effort from close range before India’s Chinglensana pulled a goal back with a penalty corner rebound at the start of the fourth quarter. The result was put beyond all doubt when Roel Bovendeert fired home in the 54th minute, rattling in a shot off the underside of the crossbar.

Netherlands captain Robert van der Horst, who was playing his 250th senior international, said: “To play my 250th cap against India in India, it doesn’t get much better than that. The crowd made it a little bit tough today, but we were so dominant during the game. We felt really strong today.”

Los Leones took the lead thanks to Peillat’s 17th minute penalty corner before Niklas Wellen - who has scored both of Germany's two goals so far at this event - restored parity ahead of half time.

There was a moment of drama in the third quarter when Argentina’s Joaquin Menini was brought down by Germany goalkeeper Nico Jacobi, who was subsequently yellow carded. Remarkably, the resulting penalty stroke was brilliantly saved by substitute goalkeeper Andreas Späck, who dived to his right to deny Juan Gilardi.

Two goals in two fourth quarter minutes settled the contest, with Matias Paredes pouncing from close range ahead of another Peillat penalty corner.

Argentina goalkeeper Juan Vivaldi, who played his 200th international match today, said: “We are very proud of this game. After the result against the Netherlands the other day our goal was to make a similar game against a tough German team, and I think we played very smart, very solid and were very effective in the circle. Today was a special day for me, and I really enjoyed the game.”