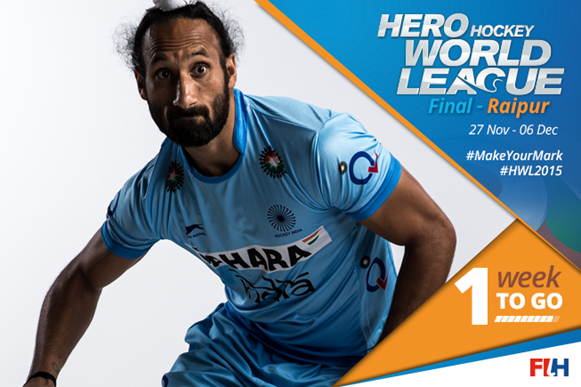 The hugely anticipated men’s Hero Hockey World League Final gets underway in the Indian city of Raipur on Friday 27 November, featuring eight of the best national hockey teams in the world.

The top four teams from the two Semi-Final events played in Argentina and Belgium over the summer will go head to head in this epic end of year showdown, which will see the winners crowned Hockey World League Season 2 champions and guarantee their place in the 2016 Champions Trophy.

With all eight teams already qualified for the Rio 2016 Olympic Games and vital FIH World Ranking points on offer, competition is set to be fierce.

Reigning World and Oceania champions Australia (FIH World Ranking: 1) will be seen as favourites in Pool A.

The team were in excellent form at the FINTRO Hockey World League Semi-Final in Antwerp, Belgium last summer.

Teenage striker Blake Govers - brother of fellow Kookaburra Kieran - announced himself to the world by finishing as top scorer and being named as Young Player of the Tournament, while five times FIH Player of the Year Jamie Dwyer showed that even at 36 years of age he is a virtually unrivalled talent.

Australia’s rivals in Pool A come in the shape of Great Britain, Belgium and Canada. Great Britain (WR: 4) arrive in Raipur with a much changed team from the one that finished third at the HWL Semi-Final in Antwerp, with captain Barry Middleton and record scorer Ashley Jackson both absent.

32-year-old defender Dan Fox will captain the team in Middleton’s absence, with plenty of additional experience being provided by the likes of attack-minded trio Harry Martin, Simon Mantell and midfielder Nick Catlin.

Belgium (WR: 7), who fell to a narrow final defeat against Pool A rivals Australia at the HWL Semi-Final in Antwerp, come into the event under the guidance of a new Head Coach, with New Zealander Shane McLeod, who enjoyed spells coaching New Zealand men and women,  taking charge following the departure of Dutchman Jeroen Delmee in September.

The team has many high quality players, but creative midfielder John-John Dohmen is arguably their most consistent performer.

Canada’s Red Caribous (WR: 14) are the lowest ranked team in the competition, but are one of the success stories of the 2014-15 Hockey World League. The team has made huge strides forward over the past 18 months, with a third place finish at the HWL Round 2 event in San Diego being followed by an impressive fourth place finish at the Hockey World League Semi-Final in Buenos Aires, Argentina. That result sealed a ticket to Raipur and as well as proving good enough for a place at the Rio 2016 Olympic Games.

Scott Tupper, Mark Pearson and Matthew Guest are star players outfield while goalkeeper David Carter is rapidly gaining a reputation as one of the finest shot-stoppers on the planet.

In Pool B, European and reigning HWL champions the Netherlands (WR: 2) are likely to take some stopping, if their form in recent months is anything to go by.

In 2015, the influence of Max Caldas – the Buenos Aires born former Argentina international who between 2012 and 2014 guided the Netherlands women to Olympic, World Cup and World League glory – has been clear for all to see, with the team sealing their place at the Rio 2016 Olympic Games with a third place finish in the Hockey World League Semi-Final in Buenos Aires before winning the Unibet EuroHockey Championships final 6-1 against Olympic champions and Pool B rivals Germany.

The Netherlands will be challenged in Pool B by Germany, Argentina and host nation India, all teams that on their day are capable of beating any team in the world.

Germany (WR: 3) are the current holders of the Champions Trophy and were victorious at the Hockey World League Semi-Final in Buenos Aires.

They will have to cope with the loss of legendary coach Markus Weise, who recently decided to step away from the team to start a new career with the Deutsche Fußball-Bund (DFB).

However with FIH Men’s Player of the Year winners Tobias Hauke (2013) and Moritz Fürste (2012) as well as FIH Young Players of the Year Christopher Rühr (2013) and Florian Fuchs (2012), they have plenty of talent within their team.

Pan American champions Argentina picked up the bronze medals at last year’s Rabobank Hockey World Cup. Since then they have climbed to fifth place in the FIH World Rankings thanks to a Pan American Cup success and a second place finish in the Hockey World League Semi-Final in Buenos Aires.

Lucas Vila is the creative mastermind of the team, while defender and 2014 FIH Young Player of the Year Gonzalo Peillat is a prolific scorer from penalty corner situations.

According to Head Coach Roelant Oltmans, Asian champions India (WR: 6) have been “showing tremendous progress” in recent weeks, and a 1-1 draw in the first of a three match test series against top-ranked Australia is certainly testament to that.

The team who finished fourth at the Hockey World League Semi-Final in Antwerp will be looking to impress in front of their home fans in Raipur.

With the likes of midfielder Sardar Singh, goalkeeper P.R. Sreejesh and drag-flicking defenders V.R. Raghunath and Rupinder Pal Singh amongst their ranks, they are certainly capable of winning the title.

The tournament kicks off in style on Friday with two mouth-watering Pool B fixtures. A large crowd is expected be on hand to witness host nation India take on Argentina at 18:30 (Indian Standard Time), before Germany and the Netherlands meet in a rematch of the 2015 European final at 20:30.