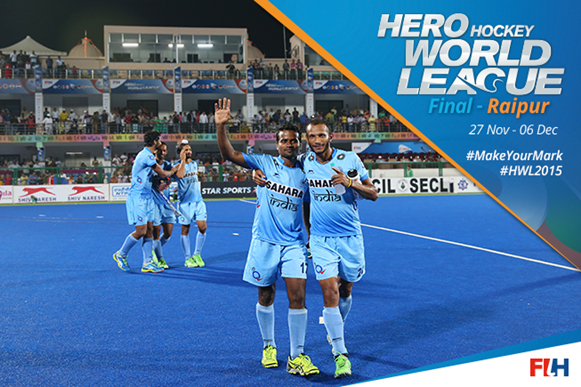 The line-up for the semi-finals of the Hero Hockey World League Final 2015 has been completed following quarter-final victories for host nation India and Belgium’s Red Lions in Raipur on Thursday.

In the first of the day’s quarter-finals, India upset the form book with a fine win against Great Britain. The home favourites, who finished fourth in Pool B, claimed a 2-1 victory over the winners of Pool A to book their ticket into the semi-finals.

A packed house turned up to watch India produce their finest performance of the competition to defeat their higher ranked opponents, with penalty corner expert V.R. Raghunath finding the target in the 19th minute before Ramandeep Singh hit the crossbar just after half time.

Talwinder Singh scored what proved to be the winner in the 39th minute, smashing home from a tight angle after picking up a long overhead pass from Kothajit Khandangbam. Great Britain’s Simon Mantell reduced the deficit with eight minutes remaining, but India held on to move into the final four.

“We started great and scored two good goals”, said scorer Raghunath after the match. “We learned from the mistakes that we made in the Pool matches and we know that we can upset any team in the world on any given day. We will relax, rest and focus on the semi-final match now.”

India’s opponents in the semi-final will be Belgium, who recorded 2-1 win over Argentina in their quarter-final match.

Alexandre hendrickx gave Belgium the lead with a low, powerful penalty corner effort in the 22nd minute, before Sebastien Dockier added a second three minutes ahead of half time, forcing the ball home following a goal-mouth scramble. A defensive error from Loick Luypaert was punished by Argentina’s Leones, with Agustin Mazzilli eliminating the goalkeeper with a perfectly placed pass into the corner of the Belgian goal. However, it proved to be only a consolation, with Belgium’s defensive line holding firm to see out the victory.

“I think we had a very good game plan, very well structured, and we played it almost to perfection”, said Belgium defender Arthur van Doren. “We made one mistake and it cost us a goal, and we almost got into a bit of trouble, and we defended hard in the final minutes but we kept it together.”

Looking ahead to his team’s semi-final meeting against host nation India, Van Doren said: “It is a big honour to play India in India, so it is something that the whole team is really looking forward to. These are the kind of games that you train all year for, the chance to play against a good Indian side in a big stadium. We will prepare well and try to get the victory.”