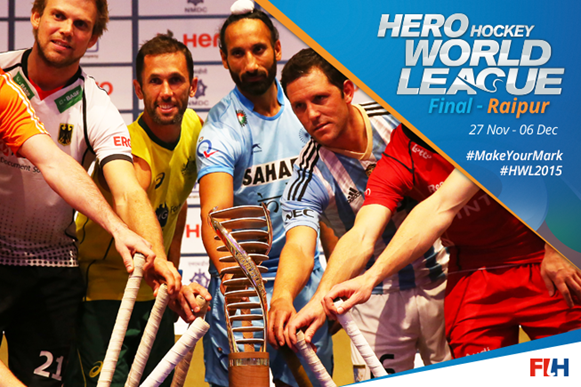 The start of the Hero Hockey World League Final in Raipur is less than 24 hours away, and the teams are putting the final touches to their preparations ahead of the stunning showpiece competition in Raipur, India.

Today, the team captains were introduced to the media at a special trophy unveiling ceremony at Raipur’s Taj Gateway Hotel, where these key players spoke about their feelings, hopes and ambitions coming into this major international event.

“It is a very important tournament, and we want to play the best that we can”, commented Great Britain captain Dan Fox, while Indian talisman Sardar Singh said: “We want to play our best hockey, and we had a good start with the test series against Australia,” referring to India’s excellent displays in the recent three match test series against the top ranked Kookaburras.

Kookaburras captain Mark Knowles was clearly keen for the event to get started, although stressed that they have a big challenge on their hands if they are to claim the Hero Hockey World League title. “We know that every team here is capable of beating us if we are not at the top of our game, but we are looking forward to playing the best teams in the world”, said Knowles, the FIH Player of the Year for 2014. “It was fantastic how many spectators watched the test series, the size of this stadium is perfect and the fans are really enthusiastic.”

Belgium’s hugely talented Red Lions will be determined to make their mark here in Raipur, with team captain John-John Dohmen eager for his team to impress new Head Coach Shane McLeod. “We want to show our best every game and to grow as a team”, said Dohmen. “The pitch here in Raipur is good. Changing a coach is never easy, now we need to find ourselves as a team.”

Pedro Ibarra, captain of Pan American champions Argentina, was eagerly anticipating the event, describing the competing nations as “the best teams in the world right now”, before suggesting that the event was a crucial stepping stone in the preparations for the Rio 2016 Olympic Games. “We are already focussed on Rio. The best teams here in my view are Australia, Holland, Germany and India.”

Legendary Germany star and double Olympic Gold medallists Moritz Fürste was enthusiastic about playing in front of the ever passionate Indian supporters, stating: “The enthusiasm of fans and media is just phenomenal in Raipur, and it means a lot to us. We know that we can play our best hockey if we have to”. Fürste also commented about the recent departure of iconic Head Coach Markus Weise, with Valentin Altenburg – at 34, the youngest senior national team coach in German hockey history – taking over. “Having a new coach is a new opportunity for everybody, I can feel a new spirit in the team. We are still suffering from the defeat in the European final against Holland, so we all know that we need to improve here before we focus to much on Rio.”

Defending and European champions the Netherlands will be lead by brilliant midfielder Robert van der Horst, who expressed his enjoyment of the competition. “We like playing in the Hockey World League. Last time we were lucky enough to win the World League and we are looking forward to play the Final again in India.”

It has been quite the journey for Canada, who came qualified through two qualifying Rounds to get to this stage. “We started in World League Round 2, and we did quite well”, said Red Caribous captain Scott Tupper, understating his team’s achievements so far.  “Now we will play against the best in the world which is very important on our way to Rio.”

The tournament kicks off in style on Friday with two mouth-watering Pool B fixtures. A large crowd is expected be on hand to witness host nation India take on Argentina at 18:30 (Indian Standard Time), before Germany and the Netherlands meet in a rematch of the 2015 European final at 20:30.