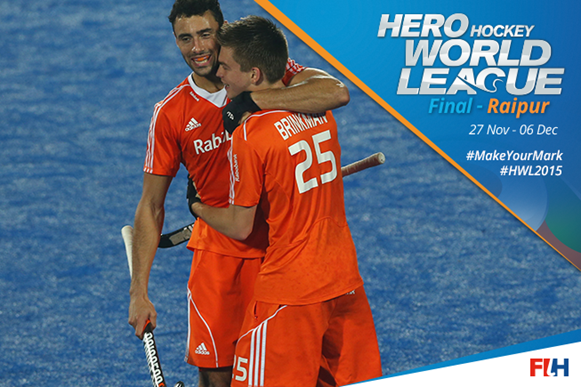 GB, Australia & Netherlands all victorious on Day 2 in Raipur

The second day of action at the Hero Hockey World League Final saw wins for Great Britain, Australia and the Netherlands, while host nation India returned to form with a deserved draw against Olympic champions Germany in Raipur, India.

Simon Mantell scored twice as Great Britain got their campaign off to a flying start with a 3-1 win over Pool A rivals Canada. Mantell needed just two minutes to open his account with a tap-in before Mark Pearson restored parity with a speculative cross from the right that found the bottom left corner. Second quarter goals from Mantell and Alastair Brogdon gave Great Britain a 3-1 advantage at half time, a lead that the dominant Europeans would never relinquish.

Also in Pool A, a solitary goal from Australia veteran Jamie Dwyer was enough for the top ranked Kookaburras to edge past Belgium.The 36-year-old five times FIH Player of the Year fired home from a tight angle in the 22nd minute to give the Aussies victory in a replay of the first place match from the Hockey World League Semi-Final in Antwerp earlier this year.

Speaking after the match, Australia striker Kieran Govers said: "It was a hard running, physical sort of game. It is always a good challenge to start off with Belgium, and we always have very close games with them. It was a scrappy 1-0 win, but we will look at the video, see what we need to improve on and look forward to taking on Great Britain tomorrow."

In Pool B, host nation India thrilled the fans by holding Germany to a 1-1 draw. For the second evening in succession, a large, passion-fuelled crowd turned out to cheer on the home team and were rewarded with a very good display from India, who rediscovered their form following their 3-0 defeat at the hands of Argentina on Friday evening. Germany were the first team to strike, with an unmarked Niklas Wellen finishing from close range just six minutes into the match before Akashdeep Singh scored a brilliant equalizer in the final quarter.

“We made far fewer unforced errors today than we did yesterday”, said India Head Coach Roelant Oltmans in the post match press conference, referring to his team’s defeat to Argentina on Friday. “Sometimes you need a result like that to show the way to play. I’m proud of the way we played, and this is where the tournament starts for us.”

The final match of the day was an absolute thriller between the continental champions of Europe and Pan America, with the Netherlands taking a 3-2 win over the ever-impressive Argentina to move to the top of Pool B at the end of Day 2.

Defending champions the Netherlands were irrepressible in the early stages, establishing a 3-0 lead thanks to spectacular strikes from youngster Thierry Brinkman and Seve van Ass before Roel Bovendeert tapped home a fine team move.  However, two goals from Argentine penalty corner expert Gonzalo Peillat dragged Los Leones back into the game and set up a tense final quarter. Despite great pressure from their South American rivals, excellent defensive work ensured that Oranje held on to claim all three points.