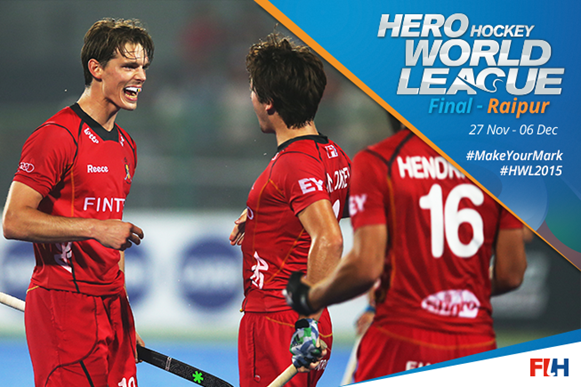 Charlier strike sends Belgium through to Final in Raipur

A solitary strike from Cedric Charlier gave Belgium a semi-final victory over host nation India, setting up a meeting with reigning World champions Australia in the title match at the Hero Hockey World League Final 2015 in Raipur.

The contest at the Sardar Vallabh Bhai Patel International Hockey Stadium was witnessed by a sell-out crowd that turned up in their thousands to watch the home favourites but did not get the result that they so desperately wanted.

The Red Lions dominated the early stages of the game and took the lead in the fifth minute when Cedric Charlier was allowed to cut in from the right before firing a backhand strike between the legs of India goalkeeper P. R. Sreejesh from the top of the scoring circle.

Belgium could have been even further ahead at half time, but India raised their game considerably in the third and fourth quarters and would have equalised were it not for a number of excellent saves from Vincent Vanasch. Arguably the best of those chances fell to S.V. Sunil, who saw his goal-bound effort kicked away by the Belgian goalkeeper with three minutes remaining to give the Europeans victory.

“We knew it would be difficult today because they have the crowd with them”, said Belgium’s Sebastian Dockier, who made his 100th senior international appearance in the match. “We did a great job in defence, but maybe we could have scored two or three more goals earlier in the match, but I am really pleased that we kept them out. We did a great job.”

Looking ahead to Sunday’s final against Australia, Red Lions Head Coach Shane McLeod said: “They [Australia] are used to the experience of playing in big finals, whereas for us it is the first time that we have been in the top four at a world level event, and now we are in the top two, so we are really looking forward to it.”

India Head Coach Roelant Oltmans said: “We did everything we could to score a goal. We created chances, sometimes you are lucky, sometimes you are not and that is just the way it is. In the third and fourth quarters the team played really well, giving everything they could to change the score. They fought their hearts out, but sometimes you need a little bit of luck.”

Sunday’s final – which will be witnessed by a capacity crowd of 3500 - will be a rematch of the first place match from the FINTRO Hockey World League Semi-Final, which took place in Antwerp earlier this year.

The 7-8 Classification match also took place on Saturday, with Olympic champions Germany cruising to an 8-3 win over Canada to end a disappointing campaign on a positive, crowd-pleasing note.

Christopher Rühr scored twice inside the opening four minutes to put Die Honomas in charge, with Moritz Fürste, Niklas Wellen and Lukas Windfeder taking the score to 5-0 before Gordon Johnstone pulled a goal back just before half time.

Matthew Guest and Canada captain Scott Tupper found the target after half time to make the score 5-3, although any thoughts of a comeback were ended thanks to a trio of German goals, with Florian Fuchs, Olver Korn and Constantin Staib completing the match scoring.