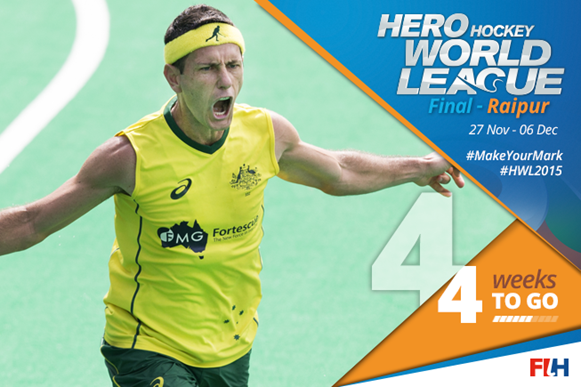 Australia coach Graham Reid will showcase a strong senior squad at the upcoming Hero World League Final in Raipur, India later this month after welcoming back players from injury and scheduled recoveries.

Having already qualified for the 2016 Rio de Janeiro Olympic Games at the Fintro World League Semi-Final in Antwerp, Belgium earlier this year, the Australian 18-man-squad will face the world’s best teams for the World League title, automatic qualification for the 2016 Champions Trophy and international ranking points.

Wollongong brothers Blake and Kieran Govers will play side-by-side Australia's Kookaburras’ kit for the second time this year. Eyes will be on 19 year-old Blake after he had a phenomenal first major international tournament at the Olympic qualifier in Belgium where he was named the tournament’s Top Scorer and Best Junior Player after netting seven goals.

The World League squad features 12 athletes from the recent Oceania Cup winning group. These athletes had consistent performances throughout the tournament, including Western Australia’s Trent Mitton who scored the winning goal for the Kookaburras in the Oceania Cup final.

Explaining the selections, Kookaburras coach Graham Reid said: “It’s a pretty experienced squad and unfortunately we don’t get enough opportunities to play the European teams, making it difficult for us to experiment at these types of tournaments due to the amount of good competition. We selected our World League squad with an eye on the upcoming 2016 Rio Olympic Games.

“There will be opportunities for two of our younger players and players returning from injury at the World League. I think the selected group showcases a good mix of players, however, we will also be giving our whole squad an opportunity during the Indian tests prior to the tournament, allowing everyone the chance to put their foot forward for Olympic squad selection.”

In Pool A, Australia’s men will line up against Belgium (world ranking: 4), Great Britain (5) and Canada (13) and could possibly face Pool B opponents the Netherlands (2), who are 2014 defending champions, Germany (3), Argentina (6) and hosts India (8) in the later stages of the competition.

The Kookaburras will be looking to redeem themselves after going down to Great Britain 2-1 in the 2014 Hero Hockey World League Final in New Delhi during the bronze medal final. Australia - world number one - will go head-to-head with Great Britain on day three of the competition.

Discussing the Kookaburras’ 2015 opponents, Reid added: “The important thing to remember is that there are phases to this tournament. The first phase is your initial pool, however, you also need to keep track on what’s happening in the other pool, because that’s going to be your crossover later on in the competition.

“All teams will be a challenge this year, however, the Netherlands have had a very good European Championship and need to be considered in the top favourites. Belgium will be under a new head coach and will be looking to impress, while India will be resting their Hockey India League players, however, their next crop coming through will be just as competitive.”

An expanded Kookaburras squad - featuring 23 athletes - will head to India on 13 November to play three test matches against India prior to the World League Final in Raipur.

The Hero Hockey World League Final will start in Raipur, India on 27 November 2015 with the Kookaburras facing Belgium in their first pool match on Saturday 28 November.