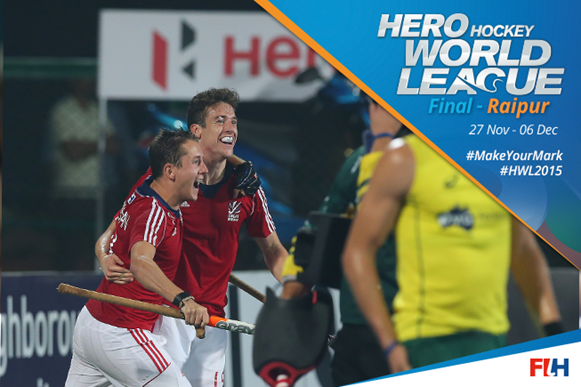 Australia beaten as Great Britain take control of Pool A

On Day 3 of the Hero Hockey World League Final 2015, Belgium found form with a big win over Canada while Great Britain stole headlines with an impressive victory over world number 1 Australia in Raipur, India.

The first match of the day saw Belgium’s Red Lions take on Canada’s Red Caribous, with the Europeans emerging as 7-2 winners in a Pool A encounter that saw Jerome Truyens marked his 300th senior international appearance with a goal.

Belgium were in sparkling form in the first quarter, powering in four fantastic goals through Sebastien Dockier, Florent van Aubel and Thomas Briels before Truyens – who was also named Hero Man of the Match - netted in his milestone game. Canada were vastly improved in the second and third quarters, with Mark Pearson pulling a goal back ahead of a beautiful flicked finish from Devohn Noronha Teixeira. However, Belgium moved back into top gear in the final quarter, with Arthur van Doren and Tom Boon on target before Van Aubel claimed his second to give the Red Lions their first win of the competition.

“It is always great to have a win in such circumstances, and also to score”, said 28-year-old Truyens, who started his international career in 2004, after the game. “The fact that my team has won and everyone has been congratulating me has been really special. You always want to score on such occasions, so I am happy that I have done that. What matters is the three points today.”

Canadian captain Scott Tupper said: "There were some part of the game when we played quite well, which is of course tough to say when you have lost 7-2. But we did play two of the four quarters very well. Hopefully we can build on that moving forward, and aim at keeping our game at a high level during the full 60 minutes."

Also in Pool A, Great Britain claimed a stunning 5-2 victory over reigning world champions Australia, a result which moved the Brits onto six points.

Henry Weir and Chris Grassick were both on target for GB in the first quarter, before Jeremy Hayward pulled a goal back for the top ranked Kookaburras two minutes into the second period. An Ian Sloan penalty corner restored Great Britain’s two goal cushion with David Condon pouncing moments after half time to establish a 4-1 advantage against the illustrious Australians. A brilliant backhand strike from Matt Gohdes early in the second quarter gave the Aussies hope, but a Phil Roper goal sealed an impressive win and put Great Britain clear at the top of Pool A.

“We had to defend well at the end but you are always going to have to do that against Australia”, said Great Britain Head Coach Bobby Crutchley, reflecting on the match. “We don’t just want to be known for one result, we want to keep going. I’ve learned a lot about them tonight that has really impressed me, and I’ll learn more about how they show up for the next game. That is because after a good win it is often the next game that is the biggest challenge.”

“We were off the pace today”, said Australia goalkeeper Andrew Charter, who made his 100th international appearance for the Kookaburras in the match. “We were a bit sluggish and GB came out with a little bit more pep than they have done against us for a while, and they really punished us for it. We’ll go back and learn a few things from this and look towards the next matches.”