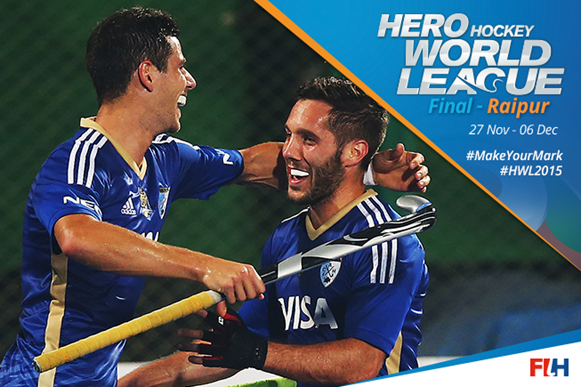 The men’s Hero Hockey World League Final 2015 got underway in Raipur, India on Friday, with Argentina defeating India before Germany and the Netherlands played out a draw in Pool B.

Penalty corner expert Gonzalo Peillat scored twice as Argentina claimed a 3-0 win over host nation India in the opening match of the competition in front of a near capacity crowd.

Following a vibrant, colourful and entertaining opening ceremony, the home fans turned out in large numbers to witness the host nation in action.

However, it was Argentina’s Leones (Lions) that came away with all three points.

The team, coached by Carlos Retegui, were in excellent form in the opening two quarters of the match, establishing a 2-0 lead ahead of half time.

Despite a powerful Rupinder Pal Singh shot being cleared off the line, Argentina were well worth their lead and continued to play excellent hockey in the third and fourth quarters.

Eventually, a third goal arrived, with Peillat grabbing his second with a penalty corner drag-flick that sailed into the roof of the Indian net in overtime.

"We started very well, the intensity was very good”, said Argentina’s two goal hero Gonzalo Peillat after the match. “We earned enough corners. Now we need to think how we play against Holland as they have a really good team."

India coach Roleant Oltmans was disappointed by the result, stating: "The first half could have been better. We did more in the second half but it was still not enough. Today we didn't deserve anything. We need to recover quickly now because the next match is tomorrow."

The day’s other match was also in Pool B, as Germany and the Netherlands battled to a 0-0 draw in a rematch of the EuroHockey Championship Final.

The last meeting between the teams saw the Netherlands power to a 6-1 win to claim the European title, but today’s match was all about the defensive lines.

Both goalkeepers were in good form in the game, with Germany’s Nico Jacobi pulling off a number of world class saves while Stockmann was deservedly named Hero Man of the Match.

“It is always good to play against the Netherlands at a tournament like this on the way to the Olympic Games”, said Germany midfielder Tobias Hauke. “I think it was interesting today after our last meeting in the EuroHockey Championship Final, where we lost pretty hard. It was important to see today, with different teams of course, that we are close now and it was a hard game for both sides.”

Netherlands Head Coach Max Caldas said that Germany were arguably the better side in the first half, but was happy with his team’s display in the second period.

“I am a big fan of the German players and the German style, and always look forward to playing them”, said Caldas. “It was a tough game but I think we took more control in the second half, although our goalkeeper saved us a little bit in the first half.”