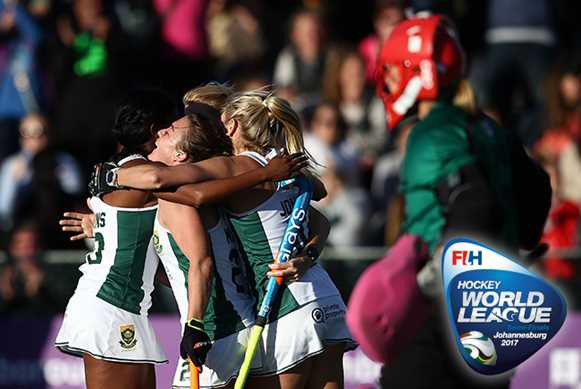 Johannesburg, South Africa: Following another high-quality day of action at the University of the Witwatersrand, the quarter-final line-up of the women’s Hockey World League Semi-Final has been revealed.

The first of the quarter-final matches, which take place on Tuesday 18th July, will be played at 11:15 South Africa Standard Time (UTC +2), with Pool B runners-up USA facing Japan, who finished third in Pool A. That match is followed by Argentina versus Ireland, with the teams that finished first in Pool B and fourth in Pool A respectively meeting at 13:30. At 15:45, Pool A winners England play Pool B’s fourth placed team India before Germany, second in Pool A, take on a South Africa side that claimed third place in Pool B at 1800.

In Pool A, England emerged at the top of the standings with nine points from their four matches, ahead of second placed Germany, Japan in third, Ireland fourth and Poland fifth. The top four were all in action on Sunday, with Germany recording a comfortable 3-0 victory over Japan before England battled past Ireland 3-2 to claim top spot.

Japan (FIH Hero World Ranking: 11) were the better team in the opening stages of their match against Germany (WR: 7), but failed to get the breakthrough despite rattling the frame of the goal moments before Die Danas took the lead in the 23rd minute. Charlotte Stapenhorst was credited with the goal, although her cross-shot appeared to be going wide before taking an unfortunate deflection from a Japanese player. Strikes in the third and fourth quarters from Nike Lorenz and Cecile Pieper sealed the win and put Germany, albeit temporarily, into first place in the pool ahead of the England versus Ireland match.

Speaking after the game, Germany captain Janne Müller-Wieland said: “Japan are a great team and we have massive respect for them. I am very pleased with the win, especially the way the team has reacted to the defeat [against England].”

Both England (WR: 2) and Ireland (WR: 15) went into the final Pool A match knowing that a win for either would be enough to top the standings, with England taking a 2-0 lead into half time thanks Sarah Haycroft’s deflected shot and a superb penalty corner deflection from Shona McCallin. The Green Army hit back with two quick goals shortly after the break through Nicci Daly and a captain’s goal from Katie Mullan, taking the score to 2-2 and leaving the European champions stunned. However, England were not to be denied, with team captain Alex Danson pouncing on a penalty corner rebound to score her 102nd international goal and seal that all-important first place finish.

“They [Ireland] are so hard working, it is actually annoying”, said England’s Lily Owsley, who earned her 100th senior international cap (England and Great Britain combined), after the match. “They just don’t give up, they fight for every ball and are getting better and better. Fair play to them, they gave us a real run for our money today and actually dominated at times but we came through it, which is the important thing.”

South Africa (WR: 13) produced an epic performance in front of a passion-filled capacity crowd to defeat USA (WR: 6) 3-2 and confirm their place in the competition quarter-finals, breaking the hearts of Chile who were forced into fifth place on the back of the result. Melissa Gonzalez cracked home a brilliant backhand effort to give USA the lead in the 14th minute before Jade Mayne pulled the home favourites level ahead of hand time. Jill Witmer edged the Americans ahead just before the third quarter break, but two goals from Candice Manuel in the fourth quarter triggered wild celebrations from the both the home fans and the players as South Africa booked their ticket to the quarter-final.

“I’m just super stoked”, said a thrilled Bernie Coston after the match. “We came here with an overall goal, now we just take it game by game. USA are a tough team to play against, and also bring the best out of us. The crowd went berserk with every tackle, and that really made a difference.”

Defeat for USA in the third match of the day meant that Argentina (WR: 3) went into their final Pool B match against India (WR: 12) knowing that they were already certain of a first place finish. It made little difference to their approach, as Las Leonas produced another excellent display to claim a 3-0 triumph over India’s Eves. Argentina needed less than 90 seconds to leave their first imprint on the score-sheet with Rocio Sanchez making it 1-0 before an open play effort from Maria Granatto and Noel Barrionuevo’s penalty stroke took the score to 3-0 at half time. India produced a much improved performance in the third and fourth quarters but Argentina's lead never looked threatened.

Argentina's Delfina Merino was pleased with her team's performance, and said that the focus would now switch onto their quarter-final clash with Ireland. "They [Ireland] are a very tough team, we've been watching some of their matches here", said Merino. "We will need to be very focused."

On Monday 17th July, the final four matches of the men’s pools will take place to decide the quarter-final line up. Australia and Japan take to the field for their Pool A contest at 12:00 South African Standard Time (UTC +2) before Spain and New Zealand, who also compete in Pool A, face-off at 14:00. Pool B draws to a close with the day’s two final matches, with Germany taking on Ireland at 16:00 ahead of the South Africa versus Belgium clash at 1800.