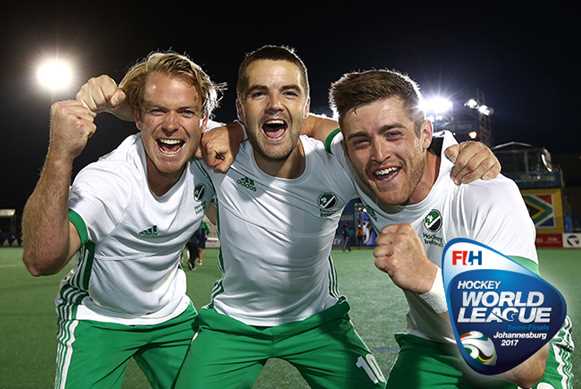 Johannesburg, South Africa: Ireland's Green Machine are now certain of a place at next year's Odisha Hockey Men’s World Cup Bhubaneswar 2018, having beaten New Zealand's Black Sticks 1-0 in the 5-6 classification match on the penultimate day of action at the Hockey World League Semi-Final in South Africa.

The team coached by Craig Fulton started well before enduring a huge amount of pressure from the New Zealanders, with Ireland's defence making numerous telling saves to keep their opponents off the score-sheet. Ireland scored what proved to be the winner in the 49th minute, with Alan Sothern chipping into the goal after an excellent save from Black Sticks shot-stopper Devon Manchester. The Irish defence held firm in the latter stages, ensuring that Ireland's men will compete in their first World Cup since 1990.

"I'm over the moon", said Ireland captain Jonny Bell after the match. "The shift that the guys put in out there was absolutely fantastic. It wasn't the best hockey but that doesn't really matter because we've reached the World Cup. I'm delighted."

The women's 5-6 classification match was won by South Africa, ended their home tournament on a high with a 2-1 triumph over Japan’s Cherry Blossoms. Although both teams entered the contest knowing that their place at next year’s Hockey Women’s World Cup London 2018 was already assured, the two sides gave it everything in a bid to finish as high in the standings as possible.

A big crowd witnessed the home team’s final performance in this event and they were not to be disappointed, with South Africa opening up a 2-0 lead in the second quarter thanks to a Lilian du Plessis’ penalty stroke and a well worked field goal from Tarry Glasby. Yuri Nagai dragged Japan back into to the contest just after half time, but South Africa saw out the win.

In the 7-8 classification matches, the women of Ireland scored twice in the final quarter to defeat India 2-1 in a highly entertaining and dramatic contest. Gurjit Kaur put India ahead with a penalty corner rocket at the end of the first quarter, while Ireland looked set to go even further behind when goalkeeper Ayeisha McFerran was sent to the sin bin for bringing down an Indian attacker.

Remarkably, reserve goalkeeper Grace O’Flanagan came off the bench to save the subsequent penalty stroke with her first touch, denying India’s Rani with wonderful stick save. The two crucial blows struck by the Green Army came just a minute apart, with captain Katie Mullan producing a wonderful penalty corner deflection before Lizzy Colvin smashed home a glorious winner from the top of the circle. The result enhances Irish hopes of qualifying for next year’s World Cup, although this is dependant on outcomes of the upcoming Continental Championships.

France triumphed 3-0 against Egypt in the men’s 7-8 play-off, boosting their own hopes of taking a place at the World Cup should results at those Continental Championships go their way. Team captain Victor Charlet put his side ahead with a sixth minute penalty corner drag-flick but had to wait until the end of the third quarter before doubling their advantage, with Hugo Genestet scoring from the penalty spot. Blaise Roseau scored the third and final goal of the match with a crisp backhand effort, ensuring that France ended their competition on a winning note.

“We were very happy with the victory against Egypt, who are a very tough side”, said France’s Victor Charlet after the match. “We hope that this has given us a chance to play in the World Cup, but we will have to wait and see.”

Sunday 23rd July is finals day, with both the men’s and the women’s competitions drawing to a close. The 3-4 classification matches kick off proceedings with England’s women taking on Argentina at 11:00 South Africa Standard Time (UTC +2), with the men’s 3-4 meeting between Australia and Spain getting underway at 13:15. USA and Germany will take to the field for the women’s final at 15:30, before Belgium and Germany contest the men’s final at 18:00.

Full coverage of the event is available on www.fih.ch, with reports, news stories, event imagery and much more. The FIH is also providing comprehensive coverage of the event via our social media channels, including Facebook, Instagram and Twitter using the #HWL2017 hashtag. For information about the broadcasters covering this event, click here.