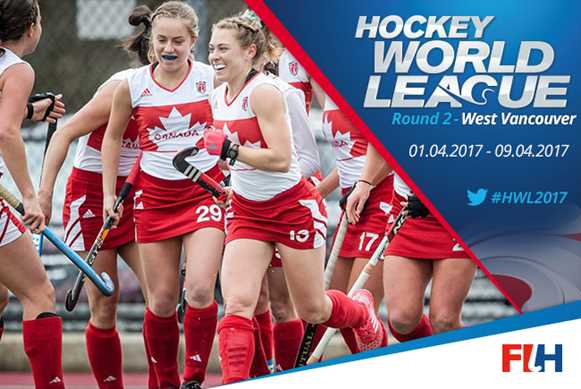 The final HWLR2 event bursts into action in West Vancouver, Canada, as another seven teams vie for a place at this summer's HWL Semi-Finals and the chance to qualify for the 2018 World Cup in London.

Home advantage, experience gleaned in 2015 against top flight opposition and the lure of a place at the 2018 World Cup – Canada women have to be among the favourites to take one of the two automatic HWL Semi Final qualification places in the third HWL Round Two competition of the current cycle.

Many of the current Canadian team (World ranking: 18) were part of the squad that played at the HWL Semi-Finals in Valencia, Spain in 2015, and the squad has undoubtedly learned from the experience. On that occasion, the team finished in ninth position, just one place ahead of fellow PAHF team, Uruguay.

Defender, Danielle Hennig, who has been a member of the team that has experienced highs and lows over the past few seasons, says: “Our team’s ultimate goal is to qualify for the World Cup. Our main focus though is just performing well throughout the entire tournament because we know, if we do that, we can accomplish our goals."

The defender, who has more than 120 caps for her country added: “As for what we learned from the HWL Semi Finals in Valencia, I guess just taking confidence that we can and have made it through to Round Three before is a powerful thing. From there we've used those games, and what maybe let us down, to shape the past two years of training and competition. We have been constantly refining and improving our game.”

However, Canada’s chances of success are far from guaranteed. Fellow PAHF teams Uruguay and Chile, are two nations that are on the rise and have exciting and experienced players in their ranks. Inspirational and long-serving captain Camila Caram and the skilful midfielder Manuela Arroz are just two of a team of Chileans who are hungry for success. A recent four place shift up the FIH world rankings leaves Chile just one place behind Canada in 19th position.

Another player from the team who is determined that Chile will make their mark on the tournament is Denise Krimerman-Losada. While she is a prolific striker, she says the Diablas’ greatest strength is their defence: “We play in a very compact way when we are playing in our area. We are setting out to win in Vancouver and to prove that Chile is a difficult country to play against. Our preparations have been against top 10 teams and we were still able to play our game. We are always in search of victory.”

Matching Chile step-for-step is Uruguay (WR: 23). Like Canada, Uruguay have experienced top flight competition recently as they also competed at Valencia in the HWL Semi-Finals in 2015. It is an experience from which the south American side have learnt valuable lessons.

Speaking after the team’s adventures in Spain, Janine Stanley said: “We arrived in Valencia as 29th in the world, we played against the best teams and we didn't disgrace ourselves. In fact, against South Africa (a 1-1 draw) we could have won the game and against Ireland we came close (3-2). Both those teams were ranked much higher.

“The experience had added confidence, awareness of a wide range of playing styles and an awareness of just how fast this game can be played,” said the experienced midfielder. "Our learning curve was huge. In every game we discovered new things about ourselves and about the team as a whole."

Their ability to perform when it matters was evident at the HWL Round One event in Peru, where Uruguay took top spot after beating Chile in the decisive final match of the round robin tournament.

The top ranked team at this event will be the Eves from India. With Ritu Rani restored to the ranks as captain, after she missed out on Rio 2016, the team ranked 12th in the world will be bringing all the experience they gained from their Olympic campaign to West Vancouver.

With new coach Sjoerd Marijne at the helm, Rani says the team has been working extremely hard in the national camp in Bhopal and were ready to show their quality on the pitch. “Apart from emphasis on fitness, there was also special sessions for mental training and it has helped the team a lot,” added the captain. A recent 5-0 test series whitewash against fellow Pool A competitors Belarus, will have given the Eves a great confidence boost going into Hockey World League Round Two.

Both Trinidad and Tobago (WR: 34) and Mexico (WR: 30) are teams that can upset the rankings. Mexico, in particular, enjoyed a strong showing at HWLR1. The central American side was unbeaten in the qualifier, with a trio of strikers – Michel Navarro, Marlet Correa and Arlette Estrada – all demonstrating great goal-scoring ability throughout the event.

Mexico beat Trinidad and Tobago 3-0 and 4-1 in that event, but the Caribbean team has been working hard, particularly on its tactics and, despite being the lowest ranked team in West Vancouver, can not be written off.

The final team in our preview is the eastern European team, Belarus. Ranked 20th in the world, Belarus has enjoyed a resurgence in hockey of late and expect to see prolific striker Sviatlana Bahushevich causing problems for the opposition’s defence throughout this event. As India discovered in the recent test series, Belarus is not a team that ever stops trying to find a way to win.

This third and final HWL R2 event promises to be an exciting mix of hockey styles and cultures, with the top two teams securing a place at the HWL Semi Finals in June and July. The third-placed team must be ranked higher than 15th placed Italy and 17th placed Scotland (who finished third in the previous two HWLR2 events) to progress to the Semi Finals.

This means that only India can afford to finish third at this event and still qualify. The action starts on 1 April, with India taking on Uruguay in the opening match.

You can keep track of the tournament in West Vancouver on the official competition pages by clicking here and on FIH’s social media channels using the #HWL2017 hashtag.