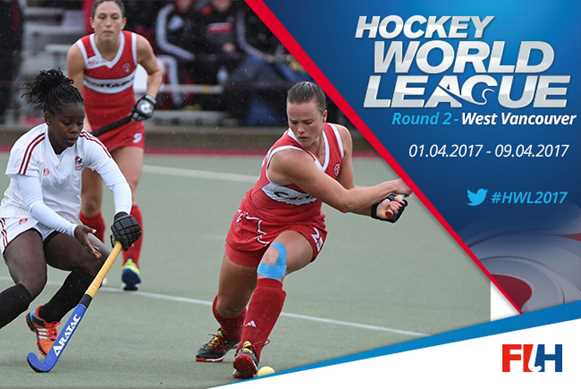 A huge win for Canada was not enough to climb to the top of Pool B as Chile had already done enough in their win over Mexico to take top spot and earn a bye to the semi-finals.

In Pool A, India finished winners, so also get a bye to the semi-finals. A spirited performance by Uruguay against higher-ranked Belarus, ensured that Uruguay will take their place in the quarter-finals against Mexico, who finished third in Pool B, while Belarus will have a potentially tough encounter against the host nation Canada.

Chile scored their opening goal in the 8th minute from a penalty corner. Camila Caram’s initial sweep on goal was saved by Mexican keeper Jesus Castillo but the air-born rebound was tapped in by Sofia Walbaum to lift Chile 1-0. In the 19th minute, Chile capitalised again on a set piece in the second quarter when Manuela Urroz deflected another sweep from Caram, this time at the far post, to double Chile’s lead.

A spirited Mexican defence put up a wall for the remainder of the game, denying Chile a third goal both in free play and through several penalty corner attempts. The opening half goals were enough to give Chile their third-straight win to top Pool B and earn a bye in to the semifinals on 8 April.

It was even opening quarter with both teams scoring just one minute apart. Uruguay executed a give-and-go play on a penalty corner that resulted in Kaisuami Dall’orso setting up Carolina Mutilva for the 1-0 lead in the 14th minute. Less than a minute later Belarus finished a set piece as Sviatlana Bahushevich deflected at the near post to tie the game 1-1 entering the first break. Matilde Kliche lifted the Cimarronas 2-1 when she picked up a rebound, curled and fired into the unguarded net in the 24th.

Following a penalty corner in the 38th minute, Belarus was awarded a penalty stroke but Yuliya Mikheichyk’s flick rang off the post. Uruguay were unable to match the pace of the Belarussian attack for most of the second half and conceded a penalty corner in the 48th minute. Belarus forward Nastassia Syrayezhka put in the rebound to tie the game 2-2. The game was decided in the final minute of play as against the flow Maria Teresa Viana Ache put in a diving deflection goal that Uruguay 3-2 to finish in an all-important second place in Pool A.

Canadian Rachel Donohoe got the scoring flurry going as the striker danced through a sea of white shirts to rip a back-hand past Trinidad and Tobago keeper Petal Derry. It was the first of three goals in as many minutes as Canadian defender Alison Lee sent a pass across the circle that deflected in off a defender. Just after, Alex Thicke walked in and found the back board to give Canada a 3-0 lead just six minutes into the game. Canada added three more deflection goals before half as Donohoe notched her second and Jordyn Faiczak buried two for a 7-0 lead at the break.

Donohoe tapped in her third goal of the game, finishing a Kate Wright pass to give Canada an eight-goal advantage in the 32nd minute. The goals kept flowing as Nikki Woodcroft, Brienne Stairs, Dani Hennig scored for Canada, who clinched second place in Pool B with the 12-0 victory.

The line-up for the quarter-finals, which take place on April 6 (all times PDT):

India and Chile have byes to the semi-finals.

To learn more about how the teams progress through the competition in the hope of reaching the 2018 Hockey World Cups, click here, with more details about all of the HWL events available by clicking here. You can keep track of the tournament in West Vancouver on the official competition pages by clicking here and on FIH’s social media channels using the #HWL2017 hashtag. Photo courtesy of PAHF/Chris Wilson/Yan Huckendubler.