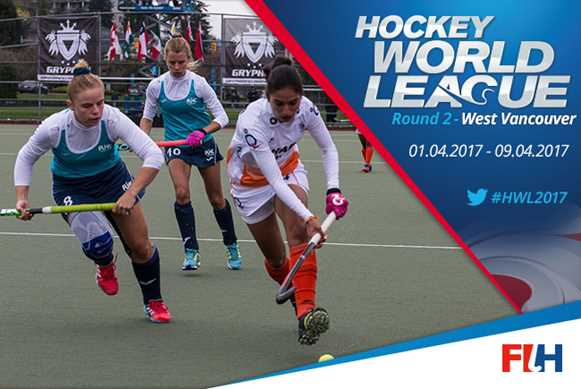 Uruguay put the world on notice on the first day of the women’s Gryphon Hockey World League Round 2 in West Vancouver, Canada as the No. 23-ranked Cimarronas forced top-ranked India into a shootout, writes Ali Lee of PAHF.

India came out on top 4-2 to earn victory Pool A, while, in Pool B, Chile and Canada cruised to victories over Trinidad and Tobago and Mexico, respectively.

Pool A: India vs Uruguay 2-2 (4-2 SO) India needed just four minutes to find their offensive tempo as captain Rani’s deflection put the Eves 1-0 up on a quick right side attack. Uruguay showed defensive composure and against the flow generated the first penalty corner of the match in the 9th minute. The low flick from Maria Teresa Viana Ache was blocked by Indian defender Ekka Deep. Late in the second quarter a series of Indian midfield turnovers allowed uncontested shots for Uruguay’s Viana Ache and Paula Carvahlo but goalkeeper Savita made both saves from close range. Despite the rush of Uruguay attacks, India remained on top, 1-0, entering half time.

India’s attack seemed flat through much of the third quarter and it was the Cimarronas who forced Savita to save back-to-back penalty corners in the early moments. Uruguay’s relentless pressure paid off when Viana Ache collected a loose ball at the top of the circle and struck on the back hand to tie the game 1-1 seconds before the break. In the 49th minute, Indian defender Monika sparked the response as she smashed a ball through the Uruguay defence to the stick of unmarked Katariya Vandana. The deflection put the Eves up 2-1 but Uruguay didn’t sit back. Uruguay’s Manuela Pilar stepped up on a late penalty stroke call and flicked high past Savita to tie the game 2-2 and send the game to shootouts, where India capitalized 4-2.

Chile’s opening game started with a celebration for midfielder Carolina Garcia’s 200th international and the experienced Las Diablas wasted no time getting on the scoreboard. Manuela Urroz created dangerous space down the right side before crossing the ball into the circle. Kim Jacob needed just one touch to bury the ball past Trinidad and Tobago keeper Petal Derry for a 1-0 Chilean lead just three minutes in. Chile added two more in the opening quarter as skipper Camilla Caram buried a penalty corner chance and Jacob added a second on a goalmouth scramble for a 3-0 lead just 11 minutes in. Chile continued to show their experience as Mariana Lagos potted two more goals, while Urroz and Consuelo de las Heras each added to the tally. In the 48th minute Trinidad and Tobago mustered up a penalty corner, which they executed well with captain Patricia Wright-Alexis deflecting in at the near post to break a Chile shutout. Second-half goalkeeper Kayla-Marie Escayg made several saves but Chile’s creativity allowed them to pot two more for a final score of 9-1.

The home field tilt was evident early as the Canadians danced through the Mexican defence to find Alex Thicke at the far post for an opening goal in the 4th minute. Stephanie Norlander notched a second for Canada only five minutes following, while Mexico keeper Jesus Castillo was called upon to turn away a handful of Canadian penalty corners including two flicks from Karli Johansen. Canadian captain Kate Wright’s solo efforts along the baseline were rewarded in the 32nd minute as her resulting shot gave Canada a 3-0 lead. Sara McManus smashed home a penalty corner for the fourth Canadian goal and Thicke tallied her second of the game when she connected mid-air to lift Canada 5-0. Mexico rallied around their keeper Castillo and the stuck-in nature of defenders Eliana Cota and Cindy Correa but Brienne Stairs put one last goal away to give the Canadians a 6-0 victory.

Match schedule for Sunday 2 April (all times are PDT):

To learn more about how the teams progress through the competition in the hope of reaching the 2018 Hockey World Cups, click here, with more details about all of the HWL events available by clicking here. You can keep track of the tournament in West Vancouver on the official competition pages by clicking here and on FIH’s social media channels using the #HWL2017 hashtag.