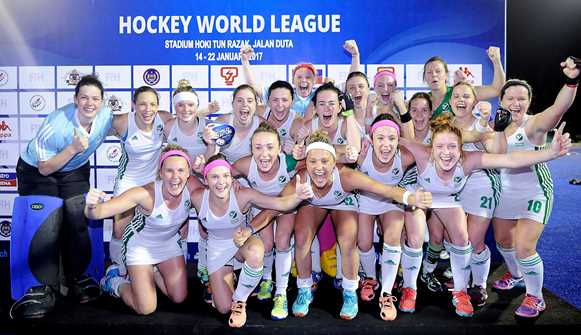 Unstoppable Ireland storm to HWL Round 2 title in Kuala Lumpur

Ireland have triumphed at the women’s Hockey World League Round 2 event in Kuala Lumpur, overcoming host nation Malaysia 3-0 in the competition final in front of a packed Tun Razak Stadium.

Goals from competition top scorer Anna O’Flanagan, team captain Kathryn Mullan and Zoe Wilson proved to be enough for the Green Army, who will now march into this summer’s Hockey World League Semi-Finals – where tickets to the Hockey World Cup 2018 in London are on offer – in confident mood. The team conceded just once in six matches in Kuala Lumpur, scoring 39 times on their way to victory.

“The performance tonight was outstanding,” said Ireland’s Head Coach Graham Shaw after the match. “We played a very attractive style of hockey and it was very enjoyable to watch, played in front of a huge home crowd. We have had an incredible experience and have grown and learned a lot as a group. This is our first competitive tournament in 18 months and we’re very proud of the team and the level of performance.”

Despite defeat, it was still a competition to remember for Malaysia’s Tigress, who also go forward to the Hockey World League Semi-Finals courtesy of their second place finish on home soil. However, Ireland were the better side on the day and fully deserved their success.

Italy triumphed in the 3-4 play-off match, seeing off Wales 3-1 thanks in part to a double strike from Valentina Braconi. The result keeps alive Italy’s hopes of reaching the Semi-Finals, as the two highest ranked of the third placed finishers from the three Hockey World League Round 2 events will be handed tickets to the Semi-Finals, the result could prove significant for the Italians.

Earlier in the day, Thailand claimed fifth place thanks to a shoot-out victory over Singapore after the match finished with the scores locked at 0-0. Samanso Supansa, Khuikland Praphatson and Piresram Anongnat were all on target as Thailand won the shoot-out 3-1.

In the 7-8 classification match, Kazakhstan edged Hong Kong by the odd goal in five, taking the match 3-2 thanks to strikes from Symbat Sabazova, Olga Khonina and Gulim Idrissova.

The women’s Hockey World League Round 2 returns to action in February (4-12 Feb) when the Spanish city of Valencia plays host to a Round 2 event featuring Spain, Scotland, Turkey, Czech Republic, Ghana, Poland, Russia and Ukraine.

The competition in Valencia will be the second of three women’s Round 2 events, each of which offer two guaranteed tickets to the World Cup qualifier Semi-Final events in Belgium and South Africa.

The third of the Hockey World League Round 2 competitions takes place in West Vancouver, Canada between 1-9 April 2017.

More information about the competition can be found on the official event website by clicking here.

To learn more about how the teams progress through the competition in the hope of reaching the 2018 Hockey World Cups, click here, with more detail about all of the HWL events available by clicking here.