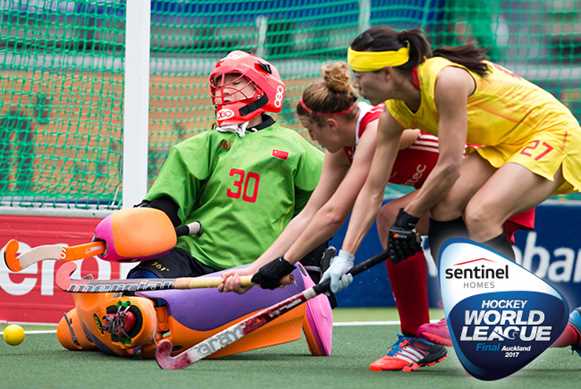 Youth is key to success for China in Auckland

Since becoming China's first choice goalkeeper prior to the 2016 Rio Olympics, Li Dongxiao has been receiving a lot of praise for her ability between the sticks. Her ability to make gravity defying dives to keep the ball from entering the net were on full display in the final of the FINTRO Women's Hockey World League Semi-Final in Brussels, Belgium earlier this year as she kept the Netherlands at bay for three-quarters of the match.

So, it comes as no surprise that Li’s name is on the sheet for the end of year showcase event, the Sentinel Homes Hockey World league Final in Auckland, New Zealand. However, China is a team that will arrive in Auckland with more to adapt to than most.

As Li explains, China is a team that is very young and has not been together very long. Combine that with the arrival of a new Coach in the shape of former Germany Head Coach Jamilon Mulders, and you can see why the goalkeeper thinks this is going to be a steep, albeit exciting, learning curve.

"The forthcoming challenge will be a good test of the team’s ability and a chance to measure progress. I am very proud that I have been selected for the national team," she says. "We are a young team this time, and this tournament could be a very good opportunity for exercising and learning."

"Our team has been adjusted a lot since the last Olympic cycle - the players are very young. We haven’t really had enough time to do adequate preparation for the Hockey World League because we have just finished the National Games. Thus this time, our main target will be developing as a team."

Auckland will be Mulders’ first tournament with China. It seems there is already a mutual respect between the coach and his team: "After the Hockey World League Semi-Finals, we invited Jami to be our new coach. There are a lot of things we need to learn from him, and he trusts us a lot."

"At this moment in time we have formed our unique playing style. We only had a short-term training period this time and Jami needs some time to get familiar with us. But, with the guidance of Jami I am quite sure that we will form our tactical style by training and playing."

Certainly, Mulders has professed himself that he is very excited at the prospect of this new challenge and there is no doubting the potential in this young China team. It's a point with which the experienced ‘keeper agrees: "The biggest advantage of our team is the age, we are younger than other teams. As a Chinese motto: new born calves are not afraid of tigers. We will treat each game with the attitude of giving maximum effort and learning."

That said, she also admitted that each and every opponent was seen as a potential threat and the tactics were often about containing the opposition for much of the match and then striking with a swift counter-attack. "For example, we played the Netherlands in the Hockey World League Semi-Final in Brussels, and our main tactic was defence and counterattack." And she added with smile, "The essence of our team is fighting spirit, I look forward to beating them one day."

While youth might be an advantage in many ways, Li admits that the prospect of travelling to New Zealand for the Hockey World League Final might cause one or two concerns for some of their lesser experienced teammates.

"It will not be a problem for me since I had participated in tournaments there several times," says Li, who holds more than 124 international caps. "For young players, most of whom will represent the national team for the first time, they might face some problems such as a different diet. But I believe they have strong adaptability. The coach will also respect to our own habits, helping us to adjust our condition then compete."

For Li, the Hockey World League Finals present a great opportunity for the team to grow together, with their new coach as much a part of that process as anyone else in the squad. "It represents the highest level of world hockey, and it is contributing to preparation for Tokyo 2020."

General admission and corporate hospitality tickets are on sale now at www.ticketek.co.nz