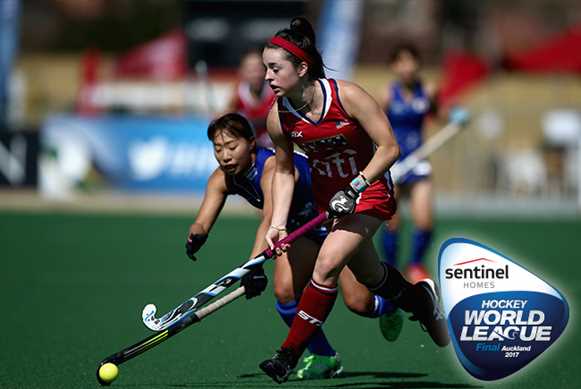 USA's Erin Matson admits USA are looking to end the year on a high Photo: FIH/Getty

As winners of the Hockey World League Semi-Final in Johannesburg, USA women are looking for a dream ending to their first appearance in the competition Final. We caught up with their youngest player and the scorer of the goal that sealed victory in South Africa, Erin Matson, as she prepared to leave for Auckland.

USA women’s hockey team travelled to Australia for a warm-up tournament ahead of their first foray into the Sentinel Homes Hockey World League Finals in Auckland but for Matson, on this occasion, education had to come first. “It has been pretty tough,” she admits, “I could’t miss a full month of school so I am flying out with the Team Manager and doctor just a few days before the Hockey World League Final. It has been a tease watching the squad out there – we are a great team and they are a great bunch of girls, so it has been hard seeing everyone out there.”

For the USA, this is the first time they have qualified for the end of year showcase event but they did so in style, winning the Hockey World League Semi-Final in Johannesburg to seal both this event and a place at the Vitality Hockey Women’s World Cup in London next year. But as Matson explains, the psyche of this USA team does not let them get too far ahead of themselves.

“Our mindset is to be the best we can be for each match as it comes, we are not a team that focuses too much on the long term. We go one game at a time. If we play well then we look to keep playing at that level or better; if we have a bad performance, we look at what went wrong and try to get it right next time around.

“I’m not saying we disregard the World Cup but we tend to look at the game ahead not think about what might be happening down the line at the World Cup.”

The USA women’s team has long been admired for the tenacity of its players and the never-say-die attitude that ensures that every player works until the end of the game. Matson agrees: “It’s as you say, whether we are 1-0 down or 2-0 up, we will always keep pushing.”

“Every team brings a different challenge. Argentina, Holland, England, they are all different and we look forward to one game at a time."
Erin Matson, USA

“Every team brings a different challenge. Argentina, Holland, England, they are all different and we look forward to one game at a time. We will look at how we can control their strengths and play our game.”

With the release of the latest set of FIH Hero World Rankings, USA are currently sitting seventh in the world. Until the Pan American Cup [where they finished third] they had risen to fourth. That drop and the slow progress up the rankings is something that Matson mentions in passing with a hint of frustration.

“We are moving slowly up the rankings but really we just want to keep getting better and better and winning more tournaments.”

Head Coach Janneke Schopman gets a definite seal of approval from Matson, who refers to the Dutch Olympian as: “One of the best coaches I have ever worked with.”

Schopman has added some European guile to the USA’s legendary work ethic. “She pushes us to levels that we are not comfortable with and that is what we need,” says Matson. “She is such a smart coach and she relays what she wants us to do so clearly. She has broadened our mindset and even increased our tenacity.”

Matson also pays tribute to the work done by the Strength and Conditioning Coach, Nick Shedd: “He has done a fantastic job making sure we are as ready as we can be for the Hockey World League. We work in four week blocks and then have a few days off before we start again, Nick, Janneke and the coaching team have got us in a fantastic place right now.”

A quick glance at the team sheet shows that this is a very young and inexperienced team. Only five players have more than 100 caps, while eight players have fewer than 20 caps. Matson herself has 21 caps for her country. “We have been through a rebuilding period,” she concedes, “But I think we have proved that hasn’t held us back. The new players are as ready to go out and perform as much as the veterans of the side are.”

Matson and her teammates are looking forward to the trip to New Zealand. The squad played there last November and, says Matson, “had a fantastic time. We learnt so much about ourselves as players and besides that, it is the most beautiful country.”

And with that the youngest member of Team USA rushed off to pack her bag and join her teammates on the final stages of their Hockey World League 2017 adventure.