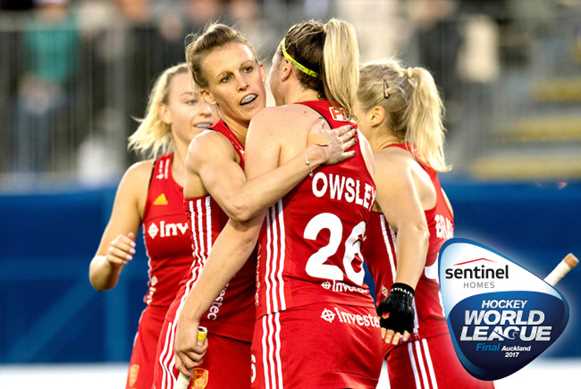 Wins today for Argentina and England in Pool B confirmed the quarter-finals line-up at the Sentinel Homes Women’s Hockey World League Final 2017 being held at Harbour Hockey Stadium in Auckland, New Zealand.

That means the quarter-final line-up sees Germany play Korea at 18:00 and Argentina against hosts New Zealand at 20:15 on Wednesday, while USA will take on England at 18:00 and Netherlands face China at 20:15 on Thursday.

The two teams leading Pool B, Germany and Argentina, faced off in the opening game of the day.

A sedate start to the match got increasingly frantic and feisty at times, with both teams aiming to finish in top spot.

Argentina upped the tempo after five minutes and forced two penalty corners, both of which proved unsuccessful. Germany were once again showing their ability in defence.

Argentina’s forward momentum paid off massively in the second quarter with two goals in two minutes.

Firstly in the 17th minute from Argentina’s fourth penalty corner, the German defence was expecting Noel Barrionnuevo to drag flick. Instead Barrionuevo deftly laid off the pass behind her to Julia Gomes who stroked the ball past ‘keeper Julia Cuipka’s left leg.

Two minutes later Argentina’s Gomes drag flick was superbly touched into the goal from a penalty corner by Maria Granatto.

Whilst Germany began to take more possession as the game went on, Argentina fought back. The Pan American champions scored two stunning field goals in the fourth quarter, firstly a bit of magic from captain Delfina Merino. She robbed Nike Lorenz of the ball at the top of the circle and nipped the ball across the goalkeeper and reverse hit the ball into the goal.

"We are improving with each game so are we feeling really confident."
Maria Granatto, Argentina

Maria Ortiz then produced a special goal a minute later when she made space on the left of the circle and smashed the ball home on the reverse.

Germany didn’t give in and their efforts were rewarded in the 55th minute. They forced only their second penalty corner and Nike Lorenz with her drag flick got it past Keeper Belen Succi’s right kicker, which proved to be the final goal of the game.

Afterwards, Argentina's Maria Granatto said: “We really deserved this win. It’s really good for us to be on top of the table. Now we play New Zealand who are a really strong team, but we are improving with each game so are we feeling really confident and looking forward to the match.”

England and China entered their match without having a win or having scored in their previous two matches.

It wasn’t long however before England scored their first two goals, both within three minutes of each other.

Laura Unsworth was outstanding in securing a heap of possession for her strikers. Lily Owsley was a beneficiary on one occasion, with a typically dynamic run down the left flank allowing her to get a shot on target, with captain Alex Danson in exactly the right place in front of goal to touch in the rebound.

Three minutes later Sophie Bray was rewarded for her creativity in the circle, slamming in goal number two.

Into the third quarter and England continued to press forward. Captain Alex Danson set up the third English goal, dribbling into the circle down the baseline and back to the spot for Hannah Martin to slam home their third goal.

In the 44th minute China converted their possession into their first goal with a left side dribble into the circle from Li Hong who battered the ball at the fast approaching English ‘keeper. Whilst Maddie Hinch partially smothered the shot, the rebound fell to Zong Mengling who was ecstatic to get on the scoresheet.

With the score at 3-1, China took off their goalkeeper Li Dongxaio with around seven minutes to go. Whilst this helped China force more attacks it also gave England the opportunity to score their fourth. Alex Danson set up team mate Sarah Haycroft for her first goal of the event.

One minute later it looked like China had scored through their penalty corner expert, Gu Bingfeng, but on referral it was deemed there had been obstruction on the English defenders.

Despite a frantic final few minutes, with China giving it their all, the match finished 4-1 to England.

Speaking afterwards, England’s Lily Owsley said: “Finally the connections worked. We were linking well as a team. As soon as we got the first goal the gates opened - it went bang, bang, bang. China put up a great fight though.” On playing USA in the quarter-finals, she said: “USA always give us a good game. They are strong, fast and fit. It will be tight and will come down to who thinks clearly when you are tired.”