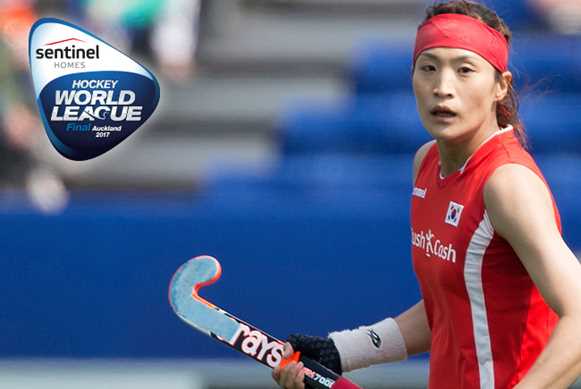 Korea plan to turn defence to attack in Auckland

Kim Jong Eun is one of Korea’s longest serving players, with more than 215 caps to her name. She is also captain of the team that has perfected the art of growing into tournaments and performing when it comes to the crucial matches.

The FINTRO Hockey World League Semi-Final in Brussels in June this year was a case in point. An underwhelming draw with lower-ranked Italy, followed by a 9-0 thumping at the hands of the Netherlands meant that many spectators had written off Korea’s chances of qualifying for either the Vitality Hockey Women’s World Cup in London or these Sentinel Homes Hockey World League Final in Auckland. But a spirited quarter-final match, which went to shoot-out, against the host nation Belgium saw Korea win to book a place in both top-flight events.

The subsequent 1-0 loss to New Zealand was a tight match that could have gone either way, but Korea were happy that they had achieved both their targets.

"We have studied the opposition teams and we have different tactics and game plans for each team. You will be surprised to see us playing different styles of hockey in Auckland.”
Kim Jong Eun, Korea

Kim Jong Eun says that since the hockey World League Semi-Finals, Korea have been working hard on their defence and maintaining structure. The tactic relies on the sharp-shooting skills of strikers such as Cheon Seul Ki and Cheon Eun Bi making the most of a limited amount of chances in a game. With Cheon Seul Ki finishing as second top scorer in Brussels, it is a tactic that works.

The captain is hopeful of a good result in Auckland. She says the team has been playing and training very well together and morale is high in the Korea camp. The team that takes to the pitch in Auckland will have some changes to the one that finished fourth in Brussels but the core, Kim Jong Eun, goalkeeper Jang Soo Ji, Kim Youngran and Park Mi Hyun – who was missing for the Hockey World League Semi-Finals – will provide a steadying influence.

Korea share Pool A with USA, the host nation New Zealand and the world number one team, the Netherlands. It is with straightforward honesty that Kim Jong Eun admits that she is wary of the encounter with the Dutch.

“The Netherlands have been one of the best teams of all the time and are a very steady and consistent team. The way they manage the game as a team is definitely their biggest strength but the individual skills within the squad are outstanding.”

For Korea, the counter-attack is where they feel they can most make their presence felt, so Coach Huh Sang Young will need to get his defensive structure spot on as Korea enter the tournament as the lowest ranked nation (9th in the world).

“This is the event where the best teams are competing to be the best in the world,” says Kim Jong Eun, as she explains why the Hockey World League Final is such an important tournament. “It is a good event to gauge where my team is at by playing against other teams from other continents and regions. For Korea, geographically, we are at a disadvantage, which restricts us when it comes to travelling to play against other teams from other parts of the world.”

While the talk is all about strong defence and counter-attack from Korea, Kim Jong Eun does throw a note of caution to the opposition. “We have studied the opposition teams and we have different tactics and game plans for each team. You will be surprised to see us playing different styles of hockey in Auckland.”

And she added, with a smile: “We are all excited about going to New Zealand, Aoteaora. Of course we will be there for hockey, but it wouldn’t harm anyone to look around the town after we win the event.”