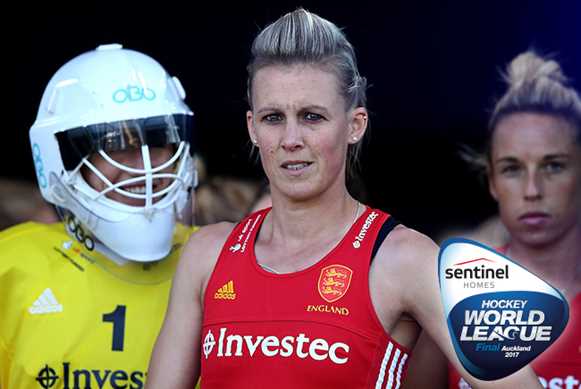 Alex Danson and Maddie Hinch are ready to take on the world in Auckland Photo: FIH.

England women will be heading out to Auckland in the ‘best possible shape’ according to Head Coach Danny Kerry. "We have great pace in our attack and in our defensive unit we have some of the best players in the world," said Kerry as he addressed a group of hockey players and spectators at the club where he first picked up a hockey stick, Pelicans Hockey Club in Norfolk.

Kerry’s words were echoed by striker Alex Danson and goalkeeper Maddie Hinch, both of whom are looking forwards to a 12 month period that includes the Sentinel Homes Hockey World League Final Auckland 2017, the Hockey Women’s World Cup London 2018 and the Gold Coast Commonwealth Games.

"I am so excited about the next few months," said Hinch. "Auckland will be a great chance for us to test ourselves against the top teams in the world and then the buzz of a home crowd for the World Cup will be unbelievable. I think about it so much."

"We have great pace in our attack and in our defensive unit we have some of the best players in the world!"
Danny Kerry, England Head Coach

The team are back in full training and, apart from a few days after the Hockey World League Final, it will be full steam ahead for the next few months. Hinch agrees with her coach that the team is in great shape. "After Rio, like all the teams, we have been rebuilding but because of our programme and Danny’s attention to detail, I think we are ahead of the curve."

England had a busy July and August with the Hockey World League Semi-Final in Johannesburg, South Africa where they finished in bronze medal place and then the EuroHockey Championships where they again finished third.

"We had a month away after the EuroHockey Championships and we came back really refreshed," said Danson, who has been temporary captain since the retirement of Kate Richardson-Walsh after Rio. "Since then we had fitness testing and we have been working on key areas in both circles – sharpening our attack and defence."

"Following Rio, we got together as a group and said, 'right, we need to respect that [the gold medal] but this is a new journey with a new group of players and now we have to form our own identity by using what we did in the past but also looking to the future.'"

The England team has retained 10 of the players who were in Rio and more who were involved in the Rio cycle and Danson says that the transition to this new group has been more seamless than perhaps anyone would expect.

"At the Hockey World League Semi-Finals, we learnt just how critical small moments are in both circles. We have been doing a lot of work on shooting, creating and taking chances. And by doing that, we have done important defensive work as well.

"We have also been doing a lot of work on group identity and behaviours around the group, not necessarily only on the pitch."

For Danson, like Hinch, the Hockey World League presents a great opportunity to play the top teams in the world but it is also a chance for the team to to get used to dealing with long haul travel. And, with the Hockey Pro League coming up, this offers a really good chance to experience taking a long haul flight and adjusting to play in a different time-zone.

When it comes to the opposition, neither Danson or Hinch gives anything other than respect to the other teams. "No team holds any fear for us," says Hinch. "There are certain players you respect but ultimately you rise to the challenge they present."

As someone who now plays her club hockey for SCHC in the Netherlands, Hinch knows firsthand some of the players who will create challenges at the Hockey World League Final. "Lidewij Welten is an awesome player and I train with Caia [van Maasakker of the Netherlands] and Charlotte Stapenhorst [Germany], both who take penalty corners against me at international level, we often joke about it, but at the end of the day, there is no huge advantage or disadvantage to the fact I know them so well. We all just appreciate each other’s skills."

For Danson, the fact that England prepare so diligently has removed any ‘fear factor’. "We do a lot of simulation training where we train as if we are playing a Chinese team or a Dutch team so we are trained for the challenge of a different team. We don’t ‘fear’ another team because we are trained to deal with their particular threat. So if they have a strong overhead game or if they play in channels, we have trained as a team to deal with that. Our challenge is to get ourselves in a position where we can play at the standard we set ourselves right until that final whistle.

"The challenge for all players is to keep the standard of play right until the 60th minute. Every international player is a very good player so the challenge is whether you can still replicate and perform when you have been playing for 59 minutes. Players are big, strong, quick and fit so you have to work so hard to keep yourself at the top of the game."

Follow all the action from the Sentinel Homes Hockey World League Final Auckland 2017 by using #HWL2017.