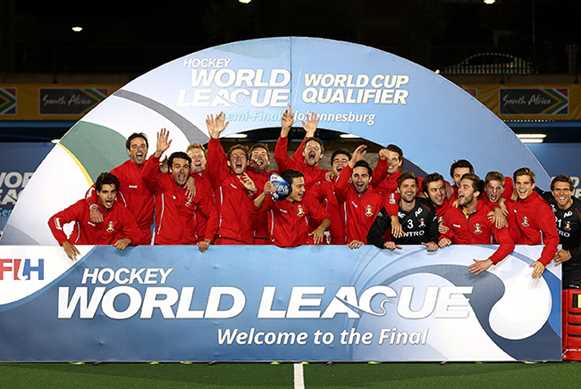 Johannesburg, South Africa: A wonderful Hockey World League Semi-Finals event drew to a close on Sunday, with USA women and the men of Belgium winning the showpiece finals in front of a capacity crowd at the University of the Witwatersrand.

Both finals were greeted by an electric atmosphere within the stadium, with USA taking dramatic shoot-out win over Germany’s women to secure a first place finish before Germany’s men also suffered defeat as Belgium’s Red Lions stormed to a 6-1 victory.

USA’s triumph over Germany in the women’s competition was certainly earned the hard way, with both teams locked in a tense tussle dominated by excellent defending for two score-less quarters. The deadlock was eventually broken by Camille Nobis, who beat Jackie Briggs with a superb near-post deflection in the third quarter.

It was a lead that they held until the 58th minute when Taylor West forced a shoot-out with a clinical penalty stroke conversion. As always, the shoot-out itself was packed full of drama, but it was USA who prevailed 3-2 thanks to conversions from Melissa Gonzalez, Michelle Vitesse and a remarkable, composed winner from 17-year-old Erin Matson, all capitalising on some crucial blocks from the outstanding Briggs.

“Germany is an incredible opponent, so we knew it was going to be a battle", said USA’s Michelle Vitesse. “It feels really good to come out on top. I’m proud of the team, proud of the work we put into it and the preparation we took to be ready.”

Belgium were rampant in the men's final, gaining a measure of revenge against a Germany side that defeated them in the pool phase. A sensational backhand penalty corner strike from Arthur Van Doren put Belgium ahead at the end of the first quarter before Tom Grambusch restored parity a minute into the second period with a penalty corner of his own. Belgium took a 4-1 lead into half time thanks to strikes from Tom Boon, Amaury Keusters and Cedric Charlier. After a tight third quarter, Charlier and Agustin Meurmans took the score to 6-1 to complete the scoring.

"Of course I am happy that we won, but it was the level of performance that was most pleasing", said Arthur Van Doren, the Best Young Player of the competition. "Germany are a world class side, as they showed when they beat us in the pool. We knew we had to play well to beat them."

The men's final was also an emotional one for John Wright, who ended his illustrious international umpiring career officiating the match alongside his younger brother and fellow international umpire Peter. John’s glittering career included umpiring at four World Cups and five Olympic Games. He took charge of consecutive World Cup Finals in 2006, 2010, and 2014 as well as the Olympic gold medals matched at Beijing 2008 and Rio 2016.

The third place matches were won by the women of England and Australia men, who saw off the respective challenges of Argentina and Spain.

England were superb in their 5-2 triumph over Argentina, with Sophie Bray forcing home a close range opener in the first quarter before Las Leonas levelled through Lucina von der Heyde. Susannah Townsend started and finished a flowing team move to put England back in front three minutes before the break, but Argentina restored parity once again on the stroke of half time thanks to a clever deflection from Delfina Merino. England kicked on in the third and fourth quarters, with defender Laura Unsworth scoring a rare goal before Giselle Ansley grabbed a double, netting a penalty stroke and a penalty corner drag-flick.

“We are thrilled to finish with a win, and it was a really professional performance out there”, said England’s Giselle Ansley. “It has been a long tournament so it is good to finish on a high. We’ve got about three weeks to until the European Championships, so the win gives us confidence before we head out to Amsterdam.”

Australia produced their most complete performance of the competition in the men’s 3-4 classification game, powering to an 8-1 victory over Spain. The Kookaburras were in scintillating form against the Red Sticks, a side they had narrowly beaten the pool phase. However, today’s meeting was a very different story, with the Kookaburras opening up a 4-0 lead going into half time before adding another four before Spain Pau Quemada grabbed a late consolation goal from a penalty corner. Jeremy Hayward and Aaron Kleinschmidt both scored twice for Australia, with Jake Whetton, Tom Craig, Trent Mitton and Tom Wickham also on target.

“We are a new group learning about each other so it was really important to take that third place today”, said Jake Whetton following the contest. “We had a tough game against Belgium the other night and we had to recuperate. We wanted to finish strong here and we have done, so very happy with third and we’ll build from here.”

Full coverage of the event is available on www.fih.ch, with reports, news stories, event imagery and much more. The FIH is also providing comprehensive coverage of the event via our social media channels, including Facebook, Instagram and Twitter using the #HWL2017 hashtag. For information about the broadcasters covering this event, click here.