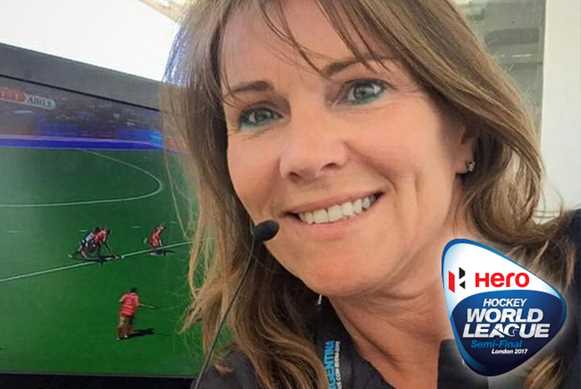 Video Umpires have been a positive step for hockey Photo: Carol Metchette

When a crucial decision can be the difference between a team qualifying for a World Cup or not, then it is important that the umpiring team gets it right. Since it was first trialled at the women’s Hockey Champions Trophy in Amstelveen, Netherlands in July 2006, video referrals have been part of top tier international hockey events, and both the teams and the umpires have become increasingly proficient at using the system for the ultimate good of the game.

The system will once again be in place at all four Hockey World League Semi-Finals over the next couple of months, giving the officials on the field an additional pair of eyes from the grandstand.

Carol Metchette is an umpire of vast experience. She started her international umpiring career in 2002 and, 10 years later, she had two Olympic Games and a World Cup on her curriculum vitae. She was, and remains, one of the fittest members of the umpiring fraternity, always scoring top in the FIH umpiring fitness tests.

Carol had to retire from umpiring in 2012 when, at 47, she reached the mandatory retirement age for FIH umpires. Since then she has transferred her huge amount of knowledge, integrity and enthusiasm to umpire management and video umpiring.

In just over a month’s time, Carol will be in the video umpire’s box for the Women’s Hockey World League Semi-Finals in Johannesburg, taking charge of any referrals that come her way. With places at the showcase end-of-year Hockey World League Final and qualification for the 2018 World Cup at stake, the Video Umpire from Ireland knows a good performance will be crucial in South Africa.

Here, she talks about the role she plays and the impact the Video Umpire has on the game. Certainly, for umpires at FIH events, the advent of video referral has been a key and positive development.

“I think the use of video referrals has made a huge difference to the game,” says Carol. “All umpires, even the best, miss things so getting the correct decision on to the pitch makes everybody happy. The decisions that go to Video Umpire are obviously big ones, so players get very frustrated if they feel this has been given incorrectly by the umpire. Therefore, when the decision comes back, the teams then forget about the ‘mistake’ or nothing being blown.  This makes life much easier for the umpire. Teams are not holding a grudge with them for the rest of the game.”

Of course, for umpires who are working their way up the ladder of proficiency, it can be unsettling to experience players questioning decisions, particularly if they are getting a number of decisions wrong in a match. Carol’s advice is to learn from the experience and to see it as a positive.

“I think when umpires use the Video Umpire for the first time it can affect them. They feel ‘oh no, I’ve got it wrong in front of all these people’, but with more experience they realise how helpful it can be. It can be a real confidence boost if they have got it right.”

Prior to the game, Carol always meets her umpiring team and discusses how the next hour and a half will pan out. She says it is vital that the umpires on the pitch feel they can trust the person in the video room. Equally, it is important that the umpire in the video room is experienced and confident themselves. It is not a job that every umpire will naturally take to, she adds.

Technological developments in the game have been key to the successful implementation of video referrals. If a referral takes a long time then players, coaches and spectators get restless and the rhythm of the game is interrupted. It is also an uncomfortable situation for the umpires on the pitch as they have to stand and wait for a decision.

Luckily, says Carol, the introduction of super slow motion cameras and an increased number of angles has meant that the Video Umpire has quick, almost instant access to the information he or she needs to make a decision. The Video Umpire still has to wait for the question relating to the referral to be posed, and sometimes this can take time due to various different factors.

A relaxation of the manner in which questions are posed has overcome this to an extent and is yet another example of the FIH working with the players and umpires to find ways to make the game even faster and a real entertaining spectacle.