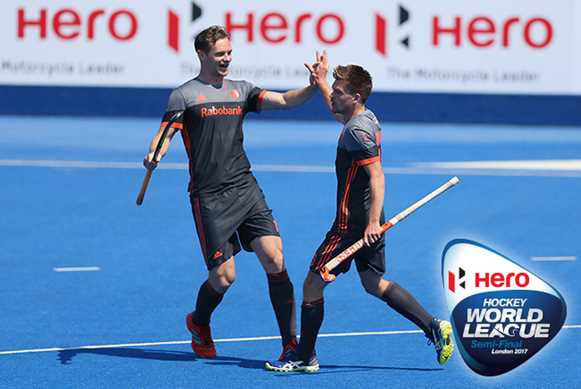 London, England: The Pool phase of the Men’s Hero Hockey World League Semi-Final drew to a close on Tuesday, revealing the teams that will line up in the event quarter-finals on Thursday.

In Pool A, Argentina finished at the top of the table, just ahead of England who were big winners against Korea in their final Pool match. Malaysia defeated China to take third place, with China claiming fourth place ahead of Korea, who are now eliminated.

In Pool B, The Netherlands beat India to seal a first place finish ahead of their opponents while third finishing Canada’s draw with Scotland proved to be good news for Pakistan, who took fourth ahead of the Scots.

The cross-over quarter-finals take place on Thursday 22nd June with Pool A winners Argentina facing Pool B’s fourth placed Pakistan at 1315 GMT, before Pool B runners up India play Malaysia at 1530. Pool B winners The Netherlands meet Pool A’s fourth placed team China at 1745 before Pool A runners up England take on Canada, who finished third in Pool B, at 2000.

The day’s play began in Pool B, with Scotland needing a win against Canada in order to qualify for the quarter-finals. Despite a valiant effort, things did not quite go their way. Gordon Johnston gave Canada the lead with a fine penalty corner drag-flick just before half time, but Scotland produced an excellent performance after the break and eventually levelled when Willie Marshall smashed home a penalty corner rebound to renew hopes. Scotland dominated the final quarter but found Canada goalkeeper David Carter in brilliant form, denying numerous chances to see out the draw. The result was good news for Pakistan, who finished fourth in Pool B and remain in the hunt for the required top five finish in order to secure a place at next year’s Odisha Hockey Men’s World Cup Bhubaneswar 2018.

India and The Netherlands brought Pool B to a close with a high intensity encounter, with the Dutch taking a 3-1 win to top the table. Thierry Brinkman scored the opening goal in the second minute before Sander Baart and Mirco Pruijser made it 3-0. Akashdeep Singh pulled a goal back just before half time with a clever finish through his own legs, but it would be India’s only strike of the contest.

“We played a really good game, especially the first 20 minutes” said Dutchman Thierry Brinkman after the match. “We were very sharp in the first quarter, scoring two goals. After that we were perhaps not so sharp, but we played with a solid defence. We are top of the group with four wins from four games and improving with every game.”

In Pool A, Malaysia claimed a second successive win at the event with a convincing 5-1 result against China. It was Malaysia’s best performance of the competition by some distance, with a superb individual effort from Faizal Saari opening the scoring as early as the second minute. Najmi Jazlan, Razie Rahim (2) and Fitri Saari were also on target, with Du Talake scoring China’s only goal of the game.

The final match of the pool phase was an entertaining clash between England and Korea, with England giving it everything they could to overturn the goal difference advantage that Argentina had but falling just short. The final score-line was 7-2, with Sam Ward scoring four times with additional strikes from David Ames and Phil Roper (2). Although they could not quite steal first place ahead of Olympic gold medallists Argentina, they completed the Pool phase unbeaten and will feel justifiably confident going into the knock-out stages of the competition.

Match Schedule for the quarter-finals