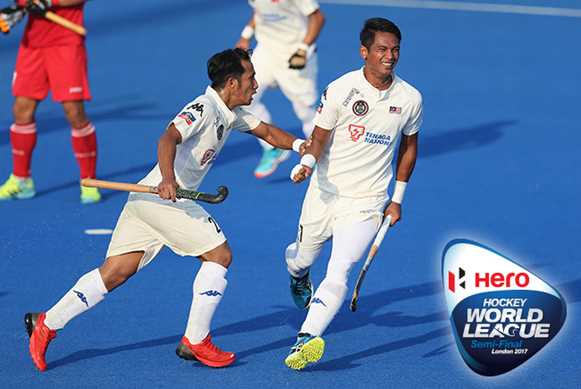 Malaysia celebrate scoring their only goal of the game against Korea at the Hero Hockey World League Semi-Final in London. Copyright: FIH / Getty Images

London, England: The fifth day of action at the Men’s Hero Hockey World League Semi-Final in London was a crucial one for Pakistan and Scotland, who both recorded important wins to boost their chances of reaching the event quarter-finals. Argentina and The Netherlands were also winners in the race to finish top of the Pools at the Lee Valley Hockey & Tennis Centre on Queen Elizabeth Olympic Park.

The day’s play began in Pool B with Pakistan claiming an important victory against Scotland. Scotland’s Blue Sticks took a 13th minute lead thanks to Wei Adams, enhancing his team’s own ambitions of reaching the quarter-finals. However, goals from Muhammad Irfan Jr, Muhammad Arslan Qadir and Muhammad Aleem Bilal turned the match around and give Pakistan their first points of the tournament with a 3-1 triumph.

The result moved the Green Shirts into fourth place in the Pool B standings having completed all their matches in the group phase. Scotland sit below them in fifth, but a win against Canada in their final Pool match tomorrow would see them move ahead of Pakistan in the Pool B table thanks to a superior goal difference.

Canada were in action in the second Pool B match of the day, putting up a great fight against The Netherlands before eventually going down 3-1. Although Canada’s place in the quarter-finals is not yet guaranteed, it would take a monumental swing in terms of goal difference for them to miss out.

Mink van der Weerden scored the opener for The Netherlands at the end of the first quarter before Canada’s ever reliable captain Scott Tupper netted from a penalty stroke just before half time. Jorrit Croon and Mirco Pruijser scored in the third and fourth quarters respectively to put the Dutch level with India at the top of Pool B, although remain second thanks to India’s superior goal difference.

In Pool A, Korea received a blow to their chances of securing World Cup qualification by falling to a narrow 1-0 loss against Asian rivals Malaysia. A penalty corner rocket from Razie Rahim five minutes after half time proved to be enough for victory despite at one stage being reduced to nine players thanks to yellow cards to Razie and Faiz Jali. The result strengthens Malaysia’s quarter-final ambitions, with the team moving three points clear of a Korean side that need a win against unbeaten England in their final match to have any hope of a place in the last eight.

Also in Pool A, Olympic gold medallists Argentina produced a classy performance to comfortably defeat China 10-0 and move into first place in the table. Penalty corner start Gonzalo Peillat took his tournament tally to a staggering eleven goals in four matches with a hat-trick, while Lucas Vila (2), Matias Paredes, Leandro Tolini, Manuel Brunet, Agustin Bugallo and Juan Lopez also on target. The boost to their goal difference means that they are now likely to finish top of the standings, with England needing a big victory against Korea on Tuesday in order to swing things back in their favour. The manor of the defeat was bad news for China, with a heavy loss seeing them drop into fourth place in Pool A, below Malaysia – who they play on Tuesday - on goal-difference.

The final day of the Pool phase will take place on Tuesday (20 June), with two Pool B matches getting proceedings underway. Scotland play Canada at 1200 GMT before India and The Netherlands face off with the winner claiming that all-important first place finish ahead of the cross-over quarter-finals. In Pool A China play Malaysia at 1800 before home favourites England take on Korea at 2000.