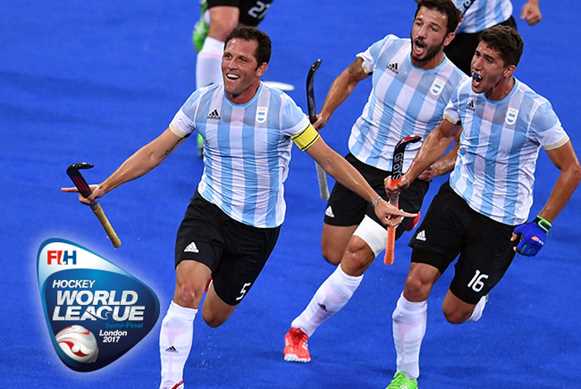 Argentina will look to build on their Rio success in London Photo: FIH/Getty Images

The head coaches of Argentina men and England women face a welcome dilemma going into the Hockey World League Semi-Finals. Both Carlos Retegui (Argentina) and Danny Kerry (Great Britain/England) are gold medal winning coaches who won at the Rio 2016 Olympics, but how do they set about motivating a group of players who have won recently on the biggest stage of all?

We caught up with Danny Kerry who led Great Britain women to gold and now takes England women to the Hockey World League Semi-Finals in Johannesburg in July.

Kerry is also reluctant to view his side as the second best team in the world – which is where England/Great Britain currently sit in the FIH Hero World Rankings. “There are other teams that are better than us right now. We have a number of people with gold medals around their necks but we also have a lot of new members in the squad and it will be about a year before they are where they need to be in order to challenge for medals.”

For Kerry, one of the teams that are looking strong at the moment is Germany. “The German team has a lot of players who have been in the squad for a long time now and have continued on from Rio. They have a lot of experienced players, so they will be strong going into the Semi-Finals.”

For both England and Argentina, the important factor is to build upon the momentum that success can bring.

Argentina has been building a winning mentality since the 2014 Hockey World Cup. At that event, they arrived in The Hague ranked 11th in the world. Over the course of the event, the team beat Germany, New Zealand and Korea to reach the semi-finals. They emerged with an unexpected bronze, after beating England. The interceding three years have seen Los Leones rise up the rankings, following a win at the Pan-Am Games and good performances at the Hockey World League Semi-Finals and Finals in 2015.

By the time Rio 2016 came around, players such as Gonzalo Peillat, Joaquin Menini and Juan Gilardi were fully-matured internationals with experience of winning. They come to London with a squad that is a great combination of experience and new faces, eager to press home their world number one status and gain automatic qualification for the 2018 World Cup.

There are also new coaching staff to be integrated into the team, and Kerry is pleased that his staff team contains a mixture of experience and new ideas. “We have fresh blood, we have experience and, much like the athletes, that means we hit the new cycle up and running. When we started the London 2012 cycle after Beijing 2008, we were starting from a very different place and that journey took a lot longer as a result.”

While Argentina men will be looking for the dual prize of a place at the Hockey World League Finals later this year as well as qualification for the Odisha Hockey Men's World Cup, Bhubaneswar 2018, England women have an automatic spot at the World Cup as hosts.

For Kerry, the target in Johannesburg is a place at the Hockey World League Finals, because this will give his new look side a great opportunity to experience top level competition in a major event.

For more information about the Hockey World League, click here.