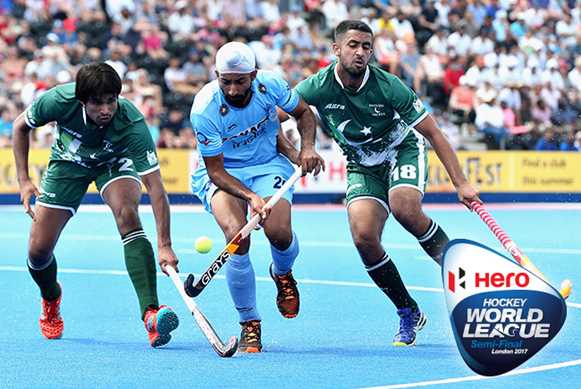 India prove too strong for Pakistan on Day 4

London, England: India recorded a big victory against Pool B rivals Pakistan while Olympic champions Argentina fought back from three goals down to claim a hard-earned draw in Pool A against host nation England on day four of the Men’s Hero Hockey World League Semi-Final in London.

The day’s play opened with a classic contest between Pakistan and India, with a large crowd enjoying the sunshine and a dominant performance from India who ran out 7-1 winners with an array of high quality strikes to move to the top of Pool B. Pakistan hit the frame of the goal in the opening period before Harmanpreet Singh fired home just ahead of the quarter-time break with a double from Talwinder Singh taking the score to 3-0 at half time. Harmanpreet made it 4-0 early in the third quarter before Akashdeep Singh and Pardeep Mor chipped in. Shortly after Pakistan’s Muhammad Umar Bhutta netted a consolation goal, India completed the match scoring through Akashdeep Singh, who claimed his second of the match.

“I thought Pakistan were the better team in the first quarter and they created more opportunities but after we scored the first goal we started to play according to our plan”, said India Head Coach Roelant Oltmans after the match. “We scored some great goals today and when we score the type of goals that we did today, that is what makes a coach happy. I enjoyed the way we played, but as always I look for things to improve in our performances but scoring seven and conceding one is good.”

Pakistan finished the day at the bottom of the Pool B table and in danger of missing out on the competition quarter finals. They will need a positive outcome from Monday’s meeting with Scotland if they are to maintain hopes of securing a place in the cross-over quarter-finals and keep alive hopes of securing World Cup 2018 qualification at this event.

Following the excitement of the Pakistan versus India contact, the fans were treated to a real treat in Pool A as host nation England claimed a 3-3 draw with Rio 2016 Olympic gold medallists Argentina. Whilst as point against the top ranked team in world hockey is creditable, England will rue the fact that at one stage they held a 3-0 lead over their opponents. A Mark Gleghorne penalty stroke in the 6th minute put England ahead; Sam Ward double the advantage three minuts later with a superb deflection before Barry Middleton netted early in the third quarter to give the home favourites a commanding advantage.

However, three goals in six electrifying minutes dragged Argentina back into the contest, with a Gonzalo Peillat penalty corner double coming either side of a Matias Paredes field goal. England were indebted to goalkeeper and team captain George Pinner in the final stage, who produce a string of fine saves – one from a penalty stroke – to ensure England claimed a share of the spoils in the clash between two sides who remain at the top of Pool A, with England currently sitting in first place thanks to a marginally superior goal-difference. Both sides are already assured of a place in the quarter-finals, but a first place finish would set up a quarter-final match against the team that finishes fourth in Pool B.

The action continues on Monday (19 June) with four more matches taking place at the Lee Valley Hockey and Tennis Centre. At 1200 GMT, Scotland take on Pakistan in their crucial Pool B contest, which is followed by another Pool B encounter at 1400 when European champions The Netherlands play Canada. At 1800, attention switches to Pool A when Korea and Malaysia go head to head before Olympic champions Argentina and China meet at 2000.