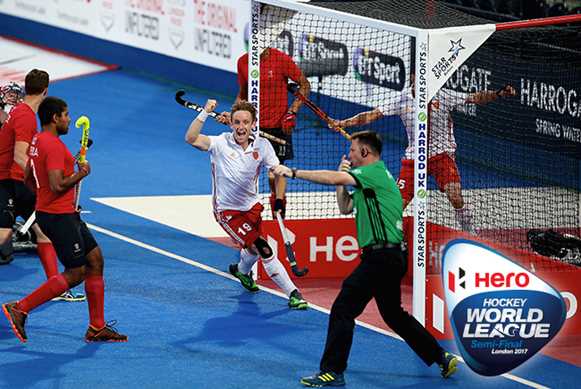 London, England: The seventh day of action at the Men’s Hero Hockey World League Semi-Final saw four teams confirm their places at the Odisha Hockey Men’s World Cup Bhubaneswar 2018 thanks to victories in the quarter-final stages.

Argentina, Malaysia, Netherlands and England all recorded the wins they required, and will now switch their attentions to winning this event and also booking a place at the showpiece end-of-year Odisha Hockey World League Final, which also takes place in the Indian city of Bhubaneswar.

Argentina (1st Pool A) were the first team to confirm their place at next year’s Odisha Hockey Men’s World Cup Bhubaneswar 2018, although Pakistan (4th Pool B) gave the reigning Olympic champions a stern trst before going down 3-1. Maico Casella scored twice in the contest, with Gonzalo Peillat also on target with his 12th goal of the competition. Ali Shan was the scorer of Pakistan’s solitary but deserved goal, netting from open play in the 49th minute. It was a special day for Matias Paredes, who celebrated his 300 senior international match with a victory.

Speaking after the game, 20-year-old attacker Maico Casella said: “I’m very happy with the game and personally really pleased to have scored. Luckily we have qualified for the World Cup which was our aim coming into this as well as reinforcing our position as world number one.”

The fact that Argentina’s semi-final opponents here in London are Malaysia is certainly something of a turn-up for the books, with India starting the quarter-final as heavy favourites against their lower ranked rivals from Asia.

India (2nd Pool B) fell to a surprise 3-2 defeat against Asian rivals Malaysia (3rd Pool A) in the day’s second quarter-final, with Malaysia’s third successive victory at the event confirming their place at the World Cup and the event semi-finals here in London. Razie Rahim and Tengku Tajuddin gave the Malaysians a 2-0 advantage in the second period, but a brilliant double strike from Ramandeep Singh restored parity ahead of half time. Razie claimed his second goal of the match with a 48th minute penalty corner, a strike which proved to be the winner despite Ramandeep missing a golden opportunity to level in the final minutes.

India’s failure to finish in the top four here in London has a knock-on effect for the Odisha Hockey World League Final at the end of the year in Bhubaneswar. As the hosts, India will be joined in Bhubaneswar by the top three finishers from the World League Semi-Finals both in London and Johannesburg, as well as the highest ranked of the fourth placed finishers from those events.

The other semi-final will be contested between The Netherlands and home favourites England, who overcame the challenges of China and Canada to book a safe passage through to the final four here in London and also seal their respective tickets to next year’s World Cup.

The Netherlands (1st Pool B) made light work of their quarter-final to confirm their World Cup qualification, turning on the style with a sparkling 7-0 win over China (4th Pool A). The Dutch scored some sensational team goals, with Mirco Pruijser netting twice alongside strikes from Robbert Kemperman, Jonas de Geus, team captain Billy Bakker, Bjorn Kellerman and Tristan Alegre. Bakker’s goal was the 50th of his international career on the occasion of his 150th international match.

While The Netherlands made cruised to victory against their opponents, host nation England were given a real scare by Canada before taking a 4-2 win. Canada established a 2-0 lead in the opening 12 minutes thanks to goals from John Smythe and Gordon Johnston before Barry Middleton reduced the deficit by tipping in a brilliant high ball, getting just ahead of Canada goalkeeper David Carter to a make it 2-1 at the end of the first quarter. Mark Gleghorne levelled matters with a fine deflection in the second period, with David Goodfield and Sam Ward scored the goals that confirmed England’s place at next year’s showpiece Hockey World Cup in Bhubaneswar.

Earlier in the day, Korea were the winners of the 11-12 classification match, defeating Scotland 6-3.

With four of the event’s five World Cup qualification places now filled by the four semi-finalists, there is now considerable interest in the race for fifth place. Pakistan, China and Canada are all in the hunt, with World Cup 2018 hosts India completing the 5-8 line-up. Depending on the outcomes of the upcoming Continental Championships, the number of World Cup qualifers from the Hockey World League Semi-Final events could increase, ensuring that there is still all to play for here in London. Like the semi-finals, the 5-8 matches take place on Saturday 24 June, with India playing Pakistan and China taking on Canada.