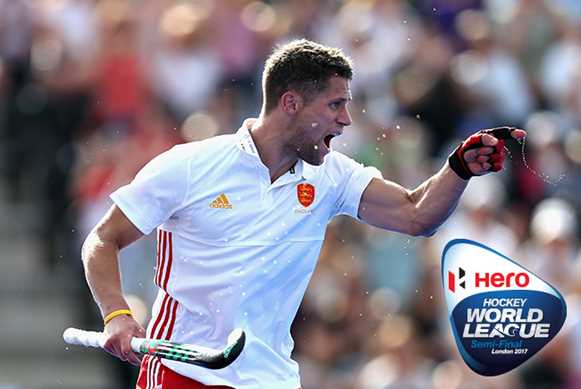 London, England:  The Queen Elizabeth Olympic Park was bathed in sunshine on day three of the Men’s Hero Hockey World League Semi-Final in London, where host nation England, India and The Netherlands all claimed second victories in this World Cup qualification event.

In Pool A, China (FIH Hero World Ranking: 18) and Korea (WR: 12) took to the field in the first match of the day, with China causing something of an upset by powering to a 5-2 win against their higher-ranked opponents. Su Jun scored twice in the contest for China, with Su Lixing, E Liguang and Guo Zixiang – who smashed home a glorious backhand strike in the final minute – also on target. The result gave China their first win of the competition, but leaves Korea sitting near the bottom of Pool A with zero points from their opening two matches.

"We played very well as a team today, fighting hard in the hot weather but the spirit is very high”, said China Head Coach Cui Yingbiao after the contest. “We came to England to play on the world stage and we want to produce the best performances as we as learn from all of the other great teams competing here.”

Later in the day, England (WR: 7) delighted the thousands of home fans packed into the Lee Valley Hockey & Tennis Centre with a fine 7-3 success against Malaysia (WR: 14), moving them onto six points in Pool A after two matches. Ahead of the game, England and Great Britain legend Barry Middleton was given a huge ovation by the fans in recognition of having recently become the highest capped British hockey international of all time. Fittingly, it was Middleton – who has now made a remarkable 381 international appearances – gave England the lead in the contest with a diving effort in the fifth minute before Chris Griffiths started and finished a move three minutes later to double the English advantage at 2-0.

Malaysia came roaring back into the game in the second quarter, with a Faizal Saari penalty stroke reducing the arrears ahead of a poacher’s finish from Tengku Tajuddin who fired home a penalty corner rebound after an initial save from George Pinner to level the scores at 2-2. However, England moved through the gears in the third and fourth quarters, with Sam Ward (2), Mark Gleghorne (2) and Middleton again contributing before Faizal Saari claimed his second of the game with a late consolation.

In Pool B, India (WR: 6) maintained their winning start to the competition with a comfortable 3-0 triumph against Canada (WR: 11). The Canadian side came into the match on the back of a sensational 6-0 victory over Pakistan, but found the Roelant Oltmans-coached India team a very different challenge. Sunil Sowmarpet and Akashdeep Singh established a 2-0 lead in the first quarter, with Sardar Singh making it 3-0 early in the second quarter. It was an advantage that India never looked likely to lose, and with six points from their opening two matches they will go into Sunday’s much-hyped meeting with Pakistan as heavy favourites. Despite defeat, it was a special day for Canada’s Gabriel Ho-Garcia, who played his 100th senior international match.

Like India, The Netherlands also have a maximum six points after two matches after they overcame a stern challenge from Scotland. The Dutch went ahead through Robbert Kemperman’s field goal at the end of the first quarter but did not add to their tally until six minutes after half time when penalty corner expert Mink van der Weerden netted. Valentin Verga completed the scoring nine minutes from the end to ensure The Netherlands moved to the top of Pool B thanks to their superior goal difference over India.

“Our second win, six points and zero goals against so it is a good start to the competition for us but I think we need to play better next game”, said Dutch attacker Jorrit Croon post-match. “Scotland did a really good job and they fought for every ball. We had a difficult match but in the end I think we restricted their chances and we should have scored some more goals.”