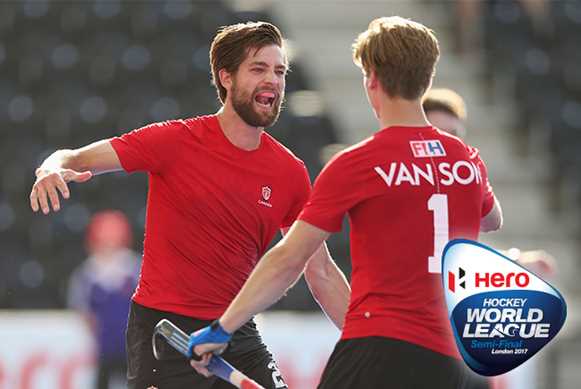 The opening match of the day saw Canada (FIH Hero World Ranking: 11) taking on a Pakistan (WR: 13) team that sat two places below them in the rankings and was looking to bounce back from their opening day defeat against The Netherlands. It proved to be a sensational match for the Canadians, who stormed to a 6-0 victory in what goalkeeper David Carter described as “probably the best performance we have produced for two years”.

A penalty stroke from team captain Scott Tupper put Canada ahead in the fourth minute before a three goal burst in the second quarter put Paul Bundy’s side out of sight against their illustrious opponents. Iain Smythe scored twice before Floris van Son made the score 4-0 with a wonderful backhand effort past the left foot of Green Shirts goalkeeper Amjad Ali. Strikes from Brenden Bissett and Gordon Johnston in the final quarter sealed an emphatic Canadian victory that will provide great confidence in the race to secure Hockey World League Final and Hockey World Cup qualification.

“We were so good in all aspects of our game today, but the best part was our attacking”, said shot-stopper Carter. “It has been a real long time since we scored six times against a top 20 ranked team, so I am really happy about how we played. We have got some new faces up front and they are firing, so teams will have to be wary of that now.”

The second and final match of the day saw Argentina (WR: 1) overcome a stubborn Malaysia (WR:14), with Gonzalo Peillat rattling in four penalty corners on the way to a 5-2 win. The two sides exchanged blows early in the match, with Peillat’s fourth minute opener being cancelled out by Sharil Saabah three minutes later before Peillat rattled home a second for Los Leones before the quarter-time break. Tengku Tajuddin restored parity for Malaysia in the 18th minute and the scores remained locked together until Peillat completed his hat-trick in the 40th minute. Peillat made it 4-2 in the 47th minute with his sixth goal in just two matches before an open play strike from Facundo Callioni put the result beyond all doubt.

Argentina’s win was their second in two days, moving the Rio 2016 gold medallists onto six points and already looking strong candidates to top Pool A.

The action continues on Saturday (17 June), with the Pool A contest between China and Korea kicking off proceedings at 1200 GMT, a match followed by Canada versus India in Pool B at 1400. At 1600, home favourites England take on Pool A rivals Malaysia before Scotland and The Netherlands meet in Pool B at 1800.