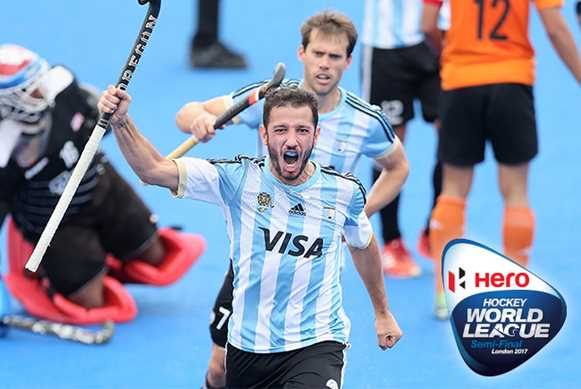 Rio 2016 Olympic gold medallists Argentina were the first team to reach the event final in London thanks to a narrow 2-1 victory over Malaysia to seal their place in the end-of-year Odisha Hockey World League Final in Bhubaneswar. The Malaysians – who have shown consistent improvement throughout this competition – were outstanding against their illustrious opponents, matching them until Lucas Vila scored superbly from a penalty corner rebound to find a gap between the legs of shotstopper Kumar Subramiam just before the first quarter-time break. Los Leones doubled the advanted four minutes into the third quarter thanks to a poacher’s goal from the impressive Manuel Brunet, but a penalty stroke convert by Fitri Saari kept Malaysia within touching distance of their opponents. Malaysia battled valiantly, but masterful defending ensured that Argentina took the win.

Ignacio Ortiz, who earned his 100th cap in Argentina’s 2-1 victory over Malaysia said: “It was a difficult match with quite a lot of nerves, so the game was quite closed. We were hoping for a more open game, but the important thing is we are in the final.”

The Netherlands came into the second semi-final of the day having only conceded twice in their previous five matches in this competition, and ended the day with that statistic intact thanks to a 2-0 triumph over hosts England. A large crowd turned out to support the host nation, but The Netherlands were very much the better team and would surely have been ahead earlier in the contest were it not for some outstanding goalkeeping from England captain George Pinner. The England 'keeper was eventually beaten in the 45th minute when Mirco Pruijser diverted Valentin Verga’s shot through the goalkeeper’s legs before Bjorn Kellerman added a second three minutes later. England continued to fight hard but the Dutch defensive unit was rarely troubled and controlled the final stages to make it six wins from six here in London.

After leading his side to victory, Dutch captain Billy Bakker said: “The nice thing about today was the crowd; it’s always good to play against the home team. I think we did a pretty good job. We came here to get a ticket to the World Cup, but also to win this tournament so it will be nice if we achieve two goals in two weeks.”

For England, defeat means that they will face Malaysia in Sunday’s 3-4 place play-off, with a ticket to the Odisha Hockey World League Final on offer to the winner.

The battle for the all-important fifth place finish and the subsequent World Cup qualification that comes with it will be contested between Canada and India after both sides won their respective matches against China and Pakistan to reach Sunday’s 5-6 classification game. As hosts of the Odisha Hockey Men’s World Cup Bhubaneswar 2018 India have already qualified but will be determined to claim the win for the extra FIH Hero World Ranking points on offer, but a win for Canada would absolutely guarentee their appearance at next year’s global showpiece.

Team captain Scott Tupper scored a hat-trick for Canada in their victory overt China, although the Asians were very much in the contest for long periods of the match before going down 7-3. China twice lead in the contest thanks to strikes from E Wenhui and Meng Dihao with Matthew Sarmento and a Tupper penalty corner drag-flick drawing Canada level on both occasions. The Canadians pulled after half time with three quick goals from Mark Pearson, Floris van Son and a brilliant chipped finish from Keegan Pereira before China’s Wo Wei making it 5-3. Scott Tupper scored penalty corners either side of the third quarter break to complete his hat-trick and the match scoring.

India, Canada’s opponents in the 5-6 contest, ran out to a 6-1 win over Pakistan. While Ramandeep Singh got the ball rolling in the eighth minute, most of the damage was done in a second quarter that featured three Indian goals without reply courtesy of Talwinder Singh, Mandeep Singh and a second for Ramandeep. A penalty corner from Harmanpreet Singh made it 5-0 after the break before Ajaz Ahmad netted for Pakistan ahead of the third quarter break with Mandeep making it 6-1 to India a minute before the end of the contest. Pakistan will meet China in the 7-8 classification match on Sunday.