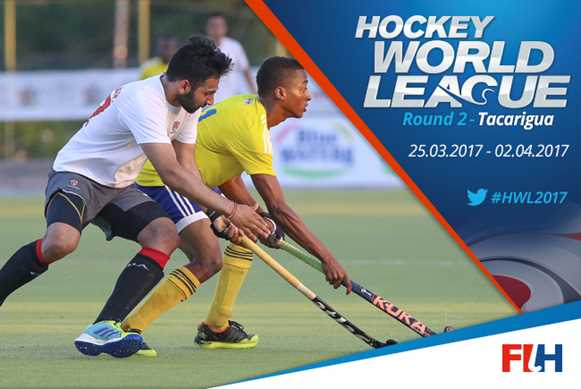 Canada and Japan have continued their excellent form at the Men’s Hockey World League Round 2 competition in Tacarigua, Trinidad & Tobago, finishing the pool phase with maximum points to go into the quarter-finals in confident mood.

Canada’s Red Caribous (FIH Hero World Ranking: 11) topped Pool A with three wins from three matches, with a comprehensive 10-0 over Barbados (WR: 49) on Tuesday bringing matters to a close. Gabriel Ho-Garcia and Gordon Johnston both scored hat-tricks in the contest for a Canadian team that will now face a quarter-final meeting with Switzerland (WR: 30), who finished fourth in Pool B.

USA (WR: 29) took second place in Pool A thanks to a shoot-out victory over Chile (WR: 26), with the bonus point earned enough to edge their opponents in the standings. Vicente Martin and Juan Amoroso established a 2-0 lead for the Chileans, but quick-fire goals either side of the third quarter break from Paul Singh and William Holt levelled the match at 2-2 to force a shoot-out, with USA winning 2-0 claiming the bonus point thanks to goals from Singh and Ajai Dhadwal as well as a clean sheet from goalkeeper Brandon Karess.

USA will now face a quarter-final clash against host-nation Trinidad & Tobago (WR: 33), who finished third in Pool B after losing their third match of the competition to an increasingly impressive Japan (WR: 16). Strikes from Kentato Fukada (2) and a sixth goal of the tournament for Kenta Tanaka gave the Samurais a 3-0 lead ahead of half time, with Tariq Marcano reducing the deficit early in the fourth quarter. However, a penalty stroke from Shota Yamada and an open play effort from Kaito Tanaka completed the scoring at 5-1 and confirm Japan’s place at the top of the standings. Japan face a quarter-final match against Barbados, the team that finished fourth in Pool A.

Russia (WR: 22) finished second in Pool B with a comfortable 4-1 win over Switzerland to set up a quarter-final face-off against Chile. The Russians did most of the damage in a seven minute period either side of half time, with Nikolay Yankun giving his team the lead ahead of the break before penalty corner efforts from Denis Shchipachev and Semen Matkovskiy took the score to 3-0. Jan Hödle pulled one back for the Swiss in the 44th minute, but the three-goal cushion was reestablished a minute later thanks to a second from Yankun, completing the match scoring.

The quarter-finals will take place on Thursday 30th March, with Canada playing Switzerland at 1315 (Local time UTC/GMT -4) before Russia take on Chile at 1530. Japan face Barbados at 1745 ahead of the USA versus Trinidad & Tobago fixture at 2000.

Like all the Round 2 events, the competition in Tacarigua – which is located around 20 kilometers inland from capital city Port of Spain – consists of teams that came through the first phase of the competition and nations that were automatically given a bye through to Round 2 due to their higher placement in the FIH Hero World Rankings. The highest ranked teams will enter the World League at the Semi-Final stage of the Hockey World League which will take place in this summer.

The top two finishers from the men’s Round 2 events in Dhaka (4-12 Mar 2017), Belfast (11-19 Mar 2017) and Tacarigua, (25 Mar-2 Apr 2017) are certain to qualify for the Hockey World League Semi-Finals, being joined in the World Cup qualifier phase by the two highest ranked of the third placed finishers from those three events.  Malaysia and China took the top two places at the event in Dhaka, with Egypt (FIH Hero World Ranking: 20) finishing in third place. In Belfast, Ireland claimed a first place finish ahead of France, with Scotland (WR: 27) taking third position.