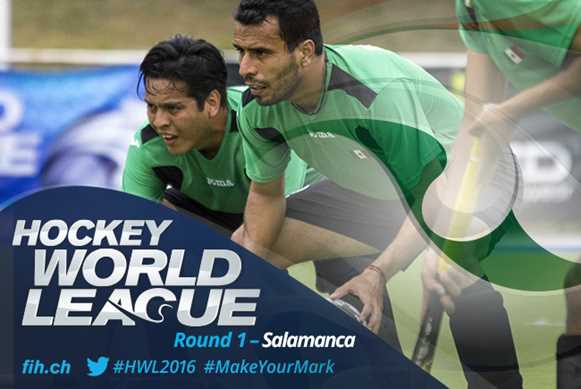 It’s Hockey World League (HWL) Round One time in Salamanca, Mexico, as four men’s teams and three women’s teams from across the Pan American region take to the pitch and resume old continental rivalries.

In the men’s competition, USA, Mexico, Barbados and Guatemala are all competing for a coveted place in HWL Round Two later this season. The women’s competition comprises Guatemala, Mexico and Trinidad and Tobago.The winning team from each event will get automatic qualification to HWL Round Two.

Head coach to the USA men’s team (world ranking 29), Chris Clements, has a relatively inexperienced squad, with five players on less than 10 caps and only captain William Holt on more than 100 caps. However, many of his team played in the Pan American Games in 2015 – where they finished fifth – and that experience can only serve as great preparation for this event.

Mexico (world ranking 33) was the team the USA beat in the fifth/sixth play-off, so the team led by Edgar Garcia, will be looking for revenge. Mexico’s coach Marco Molina has put his faith in youth as 10 of his team are under 21 and two players – Jorge Gomez and Max Fimbres are still both 15.

Barbados (world ranking 54) and Guatemala (world ranking 60) are the unknown quantities in this competition. In the Central American Games, two years ago, Barbados finished in fourth place, ahead of their Guatemalan rivals, who were seventh, but Guatemala hockey has been growing apace in the past few months and in 2015 won the Pablo Negre Trophy which goes to an association that is working to develop the game. This will be a great opportunity for the Guatemala Hockey Association to demonstrate how far it has come in a short while.

The women’s event is a three-way event featuring Guatemala, Mexico and Trinidad and Tobago. Like the men, Guatemala, led by Otto Rivera, will be looking to get results from the development work that has gone on with the country, but with a world ranking of 67, captain Kristal Cuevas and her team will need to be on top form to take the coveted qualification spot to the next round.

Arely Castellanos is coach to Mexico, who go into this event as favourites. Mexico finished sixth in the Pan American Games in Toronto, losing out to Uruguay in the play-offs on shoot-out. They are the only team of this trio to have experienced a higher level of competition and are currently ranked 33rd in the world rankings. In the play-off game in Canada, Castellanos would have been delighted with the way her side held their own against the higher ranked Uruguay team and will hope they carry that form forward.

Trinidad and Tobago come to Mexico with the highest ranking (32). A fourth place finish behind Mexico in the 2014 Central American and Caribbean Games was their most recent foray into a higher level of competition, but within their team ranks are players with a lot of experience. At 40, Mindy Charles is the oldest competitor at this event followed by goalkeeper Petal Derry and Yesenia Luces – both in their mid-30s. In a competition where most of the players are in their teens or early-20s, this could be a case of making experience count.

Both the men’s and women’s competitions get underway this week. The men’s opening day of action on 27 September sees USA take on Barbados, followed by host nation Mexico versus Guatemala. The women’s event starts on September 29, with the opening match seeing Mexico take on Guatemala.