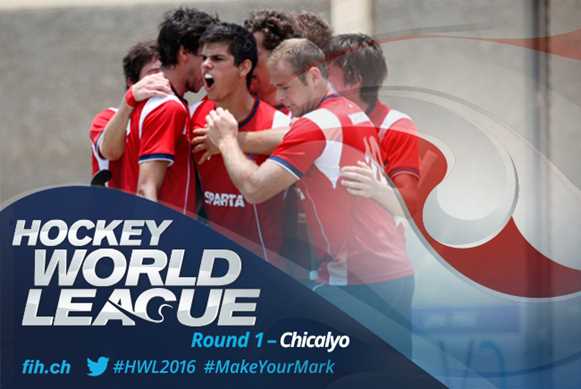 Uruguay (FIH Hero World Ranking: 23) produced a virtually flawless performance in the women’s competition to claim four wins from four matches, scoring 19 times without conceding on their way to a first place finish and a safe passage through to Round 2 of the Hockey World League. However, they were pushed hard by top ranked Chile (WR: 22), with their meeting on the final day of the event proving to be decisive.

Both Uruguay and Chile came into their head-to-head with a maximum of nine points under their respective belts, but Chile’s superior goal difference meant that a draw would be good enough for them to take the event title.

Like Uruguay, the Chilean defence had not been breached in their previous encounters, cruising to comfortable 8-0 victories over Peru (WR: 65), Brazil (WR: 41) and Paraguay (WR: 54).

Remarkably, it was the Uruguayans who won both the match and the competition, with Maria Teresa Viana Ache scoring the crucial goal in the 36th minute to give her side a 1-0 win over their marginally higher-ranked opponents.

Although disappointed by the second place finish, there were plenty of positives for the Chileans to take away from the competition, not least their guaranteed qualification for Hockey World League Round 2.

As well as producing strong performances in Chiclayo, 21-year-old striker Francisca Tala marked herself as a player with a very bright future by finishing as top scorer with six goals, three clear of her nearest challenger. Brazil finished behind Uruguay and Chile in third place, with Paraguay fourth and hosts Peru fifth.

Chile may have just fallen short in the women’s competition, but their male counterparts certainly did not.

The team placed 25th in the FIH Hero World Rankings were on blistering form in Chiclayo, powering to five straight victories with 44 goals scored and none conceded to reach HWL Round 2 in style.

Chile’s toughest opponent proved to be 47th ranked Venezuela, but goals from Ricardo Achondo and Axel Richter earned the Chileans a 2-0 victory which would eventually force the rapidly improving Venezuelans into a second place finish at the event.

Chile did well to contain Venezuela’s free-scoring striker Cristian Vargas, who went into the contest having netted a total of ten goals in his two previous matches, with the 20-year-old collecting a four-goal haul against Paraguay (WR: 63) before hitting six against Ecuador.

Following defeat to Chile, Vargas scored in both of his team’s remaining matches, against Peru (WR: 80) and Uruguay (WR: 46), to finish as the competition's top scorer with 12 goals.

Uruguay finished the competition in third place, with Paraguay, host nation Peru and Ecuador in fourth, fifth and sixth respectively.

The competitions in Peru also doubled up as the South American Championships.

Fast-paced and action-packed, the Hockey World League is the tournament that gives hockey fans the chance to see their team go all the way to the World Cup and Olympics. Composed of four rounds and played over two years, the Hockey World League shines a spotlight on the sport around the world. Even the smallest hockey-playing nations have the opportunity to write their own chapter in hockey’s history books. More information about the Hockey World League and the upcoming events can be found by clicking here.