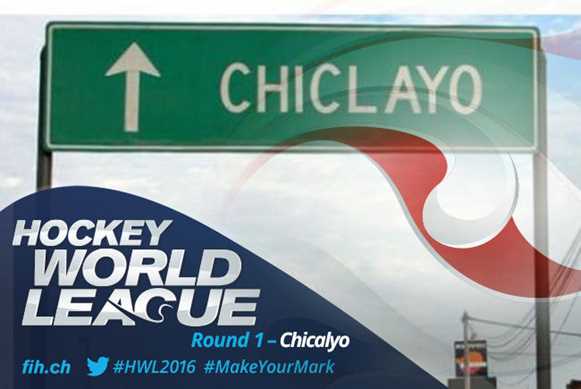 Chiclayo, Peru, is the scene of the final Round One event in the third season of Hockey World League (HWL) action.

The women’s event takes place from 30 September to 8 October, while the men’s event runs from 1 October to 9 October.

For host nation Peru this is a time for assessing the impact the Targeted Assistance Programme (TAP) has had upon hockey in the country. With the men’s team ranked 80th in the world and the women at 65th, both teams are very much in the developmental stage, but there is a lot of enthusiasm for hockey bubbling away in Peru and the Peruvian Hockey Federation is determined to make the most of it.

The aims of the Peru TAP has been to prepare the Peruvian hockey teams for participation in the HWL. To that end, head coach Andres Messina has been working alongside FIH Academy High Performance Coach Pablo Mendoza from Argentina. While the long term aim is success at the Pan American Games in 2019, a good finish here in Chiclayo would be proof that things are moving in the right direction.

Ranked at 25 in the world and with a third place finish in the 2015 Pan American Games, Chile men have to be the out and out favourites for the top spot. Martin Rodriguez and goalkeeper Adrian Henriquez bring a heap of experience, while captain Sven Richter is a live-wire in front of goal.

Uruguay and Venezuela are ranked 46 and 47 respectively although the last time the two sides met in a major competition – the 2014 South American Games – Venezuela emerged 7-1 winners in a feisty match that saw six yellow cards issued. One of the stars of the Venezuela side on that occasion was Andy Adrian and he will be hoping to score the goals that will upset the rankings again.

Paraguay (63) and Ecuador (unranked) both bring hugely inexperienced teams to this event. Both are teams very much in the development stage and, for them, much of this tournament is about gaining valuable international experience. Ecuador has five players who are making their international debut, while 11 of the Paraguay side are about to play their first major international competition. With 31 caps to his name, Paraguay’s Julio Russo will be hoping his team mates learn very quickly.

Chile and Uruguay women will arrive in Chiclayo with huge aspirations to make it to the next round. In 2015, Uruguay (23) made it all the way to the HWL Semi-Finals in Valencia and won a lot of supporters for their exciting brand of attacking hockey. Rosanna Paselle, the goalkeeper in Valencia, also won plaudits for her performance and will be hoping to lead her team to victory in Peru.

However, Chile are ranked one place higher and in the 2015 Pan American Games, they finished fourth after beating Uruguay in the pool matches.

A fourth place finish in the 2014 South American Championships behind both Uruguay and Chile would suggest that Brazil (41) will be hard pushed to take one of the qualification spots, but with hockey on a high in Brazil after the Rio Olympics, the team led by Andrea Gomes could upset the rankings.

Paraguay (54) have the second lowest ranking in the women’s competition but in Sara Rodriguez, Ivanna Romero, Maria Catebra and Lorena Alvarez, they have an experienced quartet who are capable of leading this team to some strong performances.

The final HWL Round One matches will provide a fascinating and exciting finale to what has been a tremendous start to Season Three.

The opening women’s match is between Brazil and Paraguay on 30 September, while the men’s action begins the following day with a meet-up between Venezuela and Paraguay.