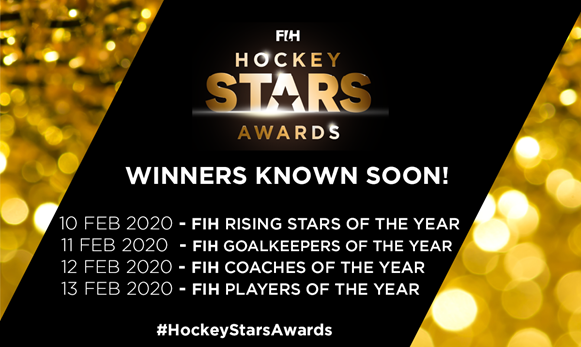 Lausanne, Switzerland: Just a few more days and the winners of the 2019 FIH Hockey Stars Awards will be known! This year, the announcement will be made in several “waves” with the first one starting on 10 February (FIH Rising Star of the Year), followed by the FIH Goalkeeper of the Year (11 February), the FIH Coach of the Year (12 February) and finally the FIH Player of the Year (13 February).

In order to keep the suspense until the last moment and considering the various time zones around the world, no specific time has been set for the announcement, only the dates. Also, the respective men’s and women’s category winners may be revealed at different times of the day in question.

The vote started on 6 December 2019 and closed on 17 January 2020. The International Hockey Federation (FIH) had invited all players from any category, fans, media and National Associations to vote for the 2019 FIH Player of the Year, FIH Goalkeeper of the Year and FIH Rising Star of the Year, Men and Women.

Votes from National Associations count for 50% of the overall result, with the remaining 50% consisting of votes from fans / players (25%) and media (25%).

The FIH Coach of the Year Award is determined by an FIH panel.